Pat Buchanan: Trump is Making the Other Republican Presidential Candidates Look Like “Wimps”

Former Presidential Candidate Pat Buchanan[1] recently weighed in on the current batch of Republicans vying for the presidency in 2016.  While he doesn’t believe that Trump has a shot at the nomination, Buchanan did have some good things to say about him. 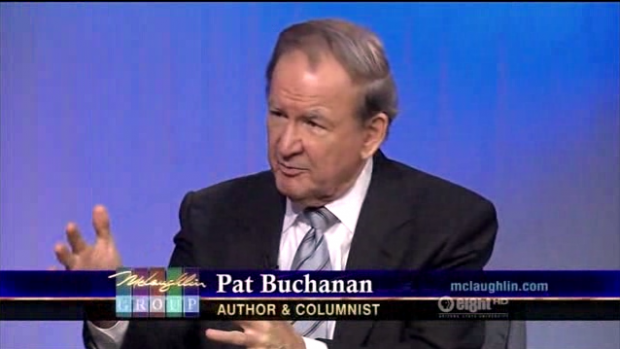 He added that Trump is “making a lot of the other Republicans look like they’re real wimps.”

Buchanan doesn’t believe Trump will win the nomination but he stated that,

“Look, what he has done — what he said was politically incorrect, no doubt about it. But what he has done is elevated this issue that is deeply concerning to tens of millions of Americans who’s dealing with the border, and all of a sudden, this character out there in San Francisco comes in, you know, a guy that’s apparently been let go a number of times, and the whole issue of sanctuary cities has been raised. And what Trump is doing, he is riding this issue into the Republican primaries where it is a tremendous issue, can garner him 15, 20 percent of the vote, that he’s got now. He’s running first. And what he’s doing is making a lot of the other Republicans look like they’re real wimps on the issue. And there’s no doubt it, John. Whatever you say about him, these other guys are people of words and he is a man of action.”

The bottom line is that Americans are tired of pandering, lying politicians who tiptoe around, afraid to offend anyone in spite of the enormous issues with which we are faced. There’s no doubt that illegal immigration is one of those issues.

It says much about the state of politics in this country when someone skyrockets to the top of the polls for simply stating the obvious and sticking to their guns while under attack.

Regardless of where you stand on Trump’s policies, you have to admit that he really is shaking up the political world with his ability to say what he means, and mean what he says. Honesty is truly becoming a lost art form.