I cannot imagine the pain this young man’s parents must be facing[2]. They were informed of their son’s death after he was involved in a motorcycle crash. The grief was heavy as they went to the mortuary to identify the body of their son. It was then that they realized the unthinkable. The son was still breathing and had a steady pulse. They rushed the still living young man to the hospital where after five hours he was reported dead, unable to survive after the two days uncared for following the accident.

Understandably, his family was devastated.

His father, Peter Mkhize, told The Times: “I have no words to express how I feel about what happened to my child. To spend the entire night and morning in the mortuary refrigerator is wrong…We arrived there at 8am to do the paperwork and view the body of my child. It was after 12pm when an employee told one of the doctors my son was alive.”

“That day will forever be etched in my mind. Allow us as a family to bury our son and thereafter we can sit down and talk about our experience in detail.”

Imran Keeka, a provincial official for the opposition Democratic Alliance party, said yesterday, “When his family arrived for identification purposes a pulse was found in the patient by mortuary staff, who then immediately transported him to Mahatma Gandhi hospital for resuscitation.” 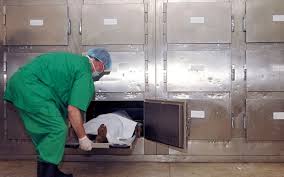