We live in troubled times[1]. Times so bad, in fact, that when you have a fender bender, apparently the response is to expose yourself and curse out an entire family including young children. Read on for details about this woman whose unhinged behavior has landed her in legal hot water. 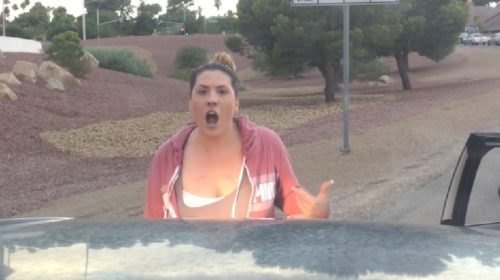 A woman who was filmed flashing and hurling profanities at a family in a road rage incident has been arrested.

Gina DeMarco, 32, of Las Vegas, is facing five charges, including two felonies, after being booked into the Clark County Detention Center this week.

Her arrest was six days after a video of her rant was filmed by Adrian Rodriguez.

DeMarco was furious after their cars collided along U.S. 95 at the Flamingo Road off-ramp on July 30, he told the local station.

He filmed her as she began cursing and exposing herself at Rodriguez and his family inside the car during rush hour traffic.

‘I mean, what was she thinking?’ he told KSNV.

‘What was the point of doing that. She was going crazy.’

But he said minutes later, she got into her vehicle and sped away from the scene.

This is not normal behavior. And this woman needs some lessons in manners, decency and how to keep her clothes on in public. Maybe she’ll receive court mandated lessons in civility and proper attire.