The Center for American Progress released ANOTHER video exposing Planned Parenthood[1]. Eleven videos in and you’d think they wouldn’t be able to keep getting worse than the one before, yet they do… 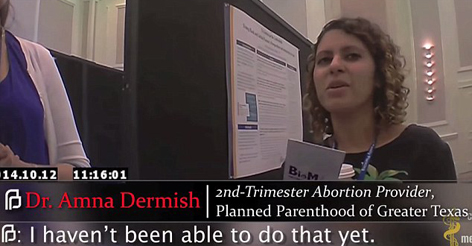 A new undercover video allegedly exposing Planned Parenthood’s involvement in the illegal sale of fetus anatomy has been released.

The 11th video produced by the Center for Medical Progress, a pro-life group, features a conversation with Dr Amna Dermish, identified as a practitioner who performs abortions in Austin, Texas.

The heavily edited clips show Dr Dermish laugh as she tells the undercover cameraman, posing as a tissue buyer at a conference, that she has never got a head out intact but ‘it’s something to strive for!’

And when she is asked how abortions are performed, Dr Dermish appears to confirm that she occasionally pulls the fetus into a ‘breech’ position [feet first], which is illegal in the United States.

Watch the video below. Deplorable.