As Americans eye Hillary Clinton’s condition, the left is working overtime to try and paint very understandable concerns about her fitness as some sort of vast right wing conspiracy. 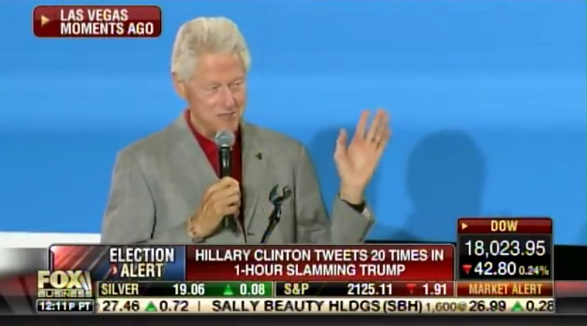 In truth, being president requires a tremendous amount of stamina and Americans have the right to know if the frail, half-demented lady seeking the office is up to the task.

In fact, liberals were so concerned about this issue, they pursued it vigorously… only in 2008 when it was John McCain who was being questioned about his health and vitality.

Prior to that, Ronald Reagan was hounded for being “too old.” Instead, the geriatric Gipper took Communism head-on and won.

So, it’s understandable why Americans would be concerned about Hillary’s health… especially when the Hillary camp cannot seem to get their stories straight…

On Wednesday, Bill Clinton stumped for Hillary and told a crowd that Hillary had “the flu,” a departure from what the Hillary camp has been telling us.

Team Hillary released supposed information concerning her health on Wednesday as her doctor (who I’m sure is an upstanding individual as Hillary only deals in objective truth) claimed that Hillary is fit enough to be president and only has bacterial pneumonia.

Still, Bill didn’t seem to get the memo on this week’s official campaign lies.[2]

He told the crowd Hillary has “the flu” which is not exactly the story they were pushing on Sunday when she collapsed at Ground Zero.

Bill Clinton: “I just talked to her and she’s feeling great and I think she’ll be back out there tomorrow. So, it’s crazy time we live in, you know, when people think there’s something unusual about getting the flu. Last time I checked millions of people were getting it every year.”

Whether Hillary reportedly has the flu or pneumonia is of little concern. What should concern Americans is that after years and years of treason, lies and lies about treason, we cannot believe a single thing this campaign says about anything.

And, even if we were in a naive mood, the fact that the campaign is saying one thing and her husband is saying another indicates that our mistrust in this band of sociopaths is well-earned.