Police Chief Announces He Will Enforce Shariah Law in His Town

When it comes to a supposed wall of separation between Church and state, liberals are only concerned about protecting government from Christianity. Islam, on the other hand, gets a free pass.[1] 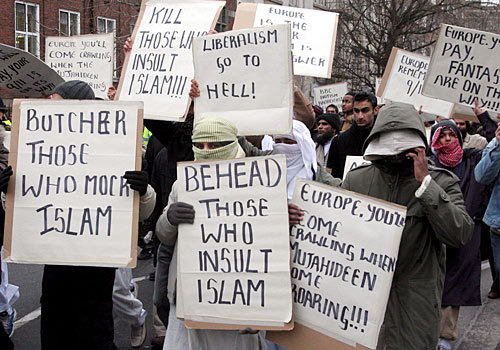 Ah, Dearbornistan. It’s the one place in America where the Council on American-Islamic Relations isn’t terribly concerned about the separation of church and state.

Dearborn has one of the largest populations of Muslims in the United States, with an estimated 40 percent of the city’s population being of Arab descent. So, for Ramadan, the police chief announced that he’s going to be enforcing a curfew on all residents — including Christians.

The Islamic holy month of Ramadan requires Muslims to fast from sunrise to sunset, meaning that many food shops are open 24 hours a day to accommodate fasting needs. The city has a curfew in effect during the hours of 10 p.m. to 6 a.m. Monday through Friday, with a slightly later curfew on the weekends.

Dearborn Police Chief Ron Haddad, a Muslim, said that the city’s Muslim parents should be extra careful making sure their children don’t congregate after those hours.

The first meal after sunset, iftar, and the last meal before sunrise, suhur, both take place during those hours. During the holy month, many Muslims will come together for those meals.

“When we find them in curfew violation we take them home the first time,” Haddad told reporters. “And the second time, we give them a ticket.” (H/T Shoebat[3])

It’s important to note that there are several viable alternative interpretations to what is being done here. On the one hand, the police chief could be reminding Muslims that while they are out during Ramadan, the rules will still apply to them. On the other hand, this could be seen as reminding non-Muslims to be respectful during the holiday. And even another way to interpret what’s happening is that the chief is enforcing curfews to keep Muslim children near their families and at home celebrating the religious meals required during Ramadan, and telling Christians and others to keep out of the way.

This isn’t the first time Shariah law has raised its ugly head in the Michigan city, and it’s not the first time the police chief and his deputy chief have come under fire for seemingly enforcing shariah law. The city arrested Christians[4] for street preaching during a fair in the city and also refused to protect Christians who were being assaulted.

Given the police chief’s history, it’s alarming that he would make these kinds of comments without clarifying exactly what he is enforcing and why. In other words, if there are no sinister motives, he should say so.

Dearborn is also the city where The Home Depot[5] employees receive special training to “better serve their Muslim customers and accommodate the religious sensitivities of their Muslim employees.”

Shariah Law is not only coming to America, it’s already here.