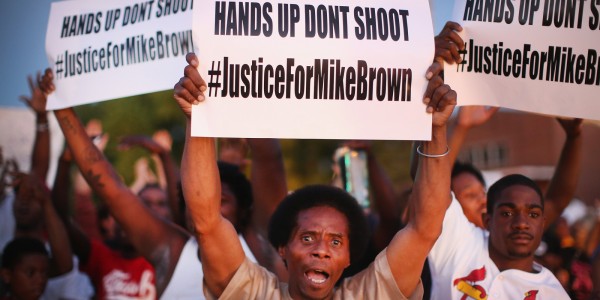 Calling it a “piece of crap,” the president of New York City’s most powerful police union slammed a controversial art exhibit based on an outrageously false narrative promoted by a thug — “hands up, don’t shoot.”

The participation-type art project, titled “Hands Up,” enjoyed a strong showing at its Friday opening in Queens, according to the New York Daily News[3]. It overwhelms the senses with camera flashes and the sound of gunfire each time a patron raises his hands.

But New York’s finest are calling it a crime against integrity.

“This so-called ‘art project’ is based upon a lie and perpetuates a falsehood about police officers and their use of force,” Patrick Lynch, president of the Patrolmen’s Benevolent Association, said according to the Daily News. “If art is supposed to enlighten and uplift, this piece of crap doesn’t qualify.”

Artists Atif Ateeq, 31, and Roopa Vasudevan, 30, envisioned the exhibit, which runs through Tuesday at the Flux Factory in Queens, after a Staten Island grand jury in December decided not to indict Police Officer Daniel Pantaleo in the July death of Eric Garner.

The two discussed the exhibit at a party in January. Garner died from a police chokehold after cops confronted him for selling loose cigarettes. His death, along with that of Michael Brown in Ferguson, Mo., sparked mass protests around the world.

“I want people to walk away feeling uncomfortable and for this experience to provoke thought,” Ateeq said, according to the Daily News. “This topic is about the imbalance of power in society.”

The “hands up” lie was advanced by Dorian Johnson following the Ferguson, Mo. shooting death of Michael Brown. Johnson, a friend and accomplice to Brown, claimed Brown had his hands up in surrender when Ferguson police officer Darren Wilson shot the rounds that led to Brown’s death.

Without waiting to hear any real evidence, the Obama administration swallowed Johnson’s story hook, line and sinker, and sent three representatives to Brown’s funeral, according to The Washington Times[4].

When a St. Louis county grand jury failed to indict Wilson for Brown’s death, then-Attorney General Eric Holder sent a team of investigators to Ferguson to pore over the evidence.

The investigators concluded that eye-witness and forensic evidence proved that Brown — not Officer Wilson — was the aggressor.

“Hands up, don’t shoot” was a monumental, bald-faced lie.

And what’s the result?

Murders of police officers have nearly doubled since the Brown shooting, from 27 to 51, according to Breitbart.com[5], which reported:

Losing 27  fellow officers in 2013 was a tragedy. But it was also a 35 year low. Things were unquestionably moving in the right direction. Since 2011, the number of police officers killed in the line of duty had been on the decline.

Suddenly in 2014, everything changed for the worse. The number jumped back up to the highest number since 2011. What also changed for the worse is the mainstream media’s obsession with smearing police officers as hyper-militarized racist occupiers on the hunt for black men.

Demonstrators continue to chant the “hands up, don’t shoot” narrative, even though it’s been proven to be false six ways from Sunday.

We should not feel compelled to censor art, but we should feel free to condemn it. Art is meant to highlight a truth in society and provoke thought; this monstrosity is not art- it is propaganda.