Police Officer Rescues Terrified Dog, Then Both Fall for Each Other on Way to Animal Shelter 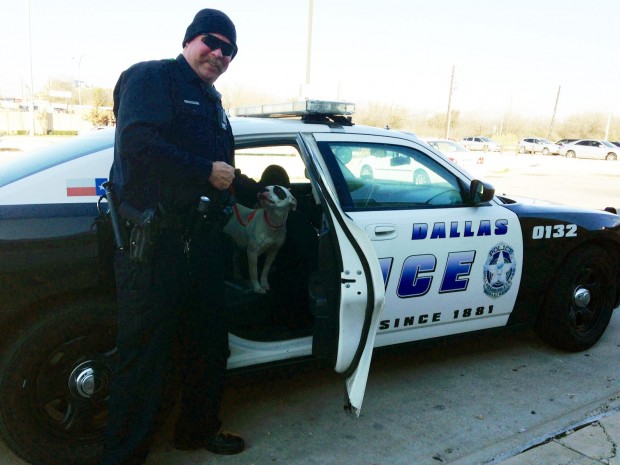 [1]Dallas Police Officer John Rogers was called yesterday to rescue a stray dog stranded on the Interstate 35E. When he arrived, he found a white boxer-pit bull mix  lying down between the northbound and southbound lanes along the center barrier wall. He carefully got the dog to come toward him and jump in his patrol vehicle, not easy to do since the dog could have rushed into traffic. Once inside, the stray showed Officer Rogers a friendly side.[2]

“She was kinda licking me on my face and I was interacting with her, scratching her behind her ear,” Rogers said. “She didn’t try to snap at me or anything like that. She seemed very affectionate.”

Rogers then snapped a picture of the dog on his camera phone and sent it to his wife, who was at home with the couple’s three other dogs.

His wife then responded, suggesting the officer keep her, Rogers said.

“And since it was the wife’s idea, and it is close to Valentine’s [Day], I didn’t want to take a chance on undermining that,” Rogers said with a laugh.

Officer Rogers was required to deliver the dog to the animal shelter, where he must wait three days to see if anyone comes forward to claim her. Then he intends to adopt the friendly creature. What a wonderful Valentine’s Day present for the dog, which Officer Rogers has decided to name Laurel. Watch the heartwarming video below.