I submit that that prior polls showing support for Gay marriage should be taken with a grain of salt considering the atmosphere of intimidation that exists in the country today. 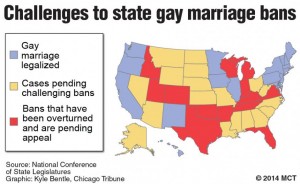 Grand Haven Tribune [2]reports a survey released Monday from the Pew Research Center indicates American support for same-sex marriage could be leveling off after several years of dramatic growth in acceptance of equal rights for gays and lesbians. The study’s authors caution it’s too soon to draw any definitive conclusions. But the new poll released Monday found a 5 percentage point drop since February, from 54 percent to 49 percent, in Americans who want legal recognition for same-sex relationships. The percentage of those opposed increased during that same period, from 39 percent in February to 41 percent last month.

“Since we’ve seen this upward trend for so long, we’re cautious because it’s too early to say what this means for long-term trends,” said Jessica Martinez, a researcher in Pew’s Religion and Public Life Project. “As we continue to ask this question in other surveys, we’ll keep an eye on where this moves.”

The findings were part of a survey in which nearly three-quarters of Americans said religious influence in public life was waning and most saw that as a negative trend. About half of respondents said churches and houses of worship should speak out more on public issues.

Nearly half of all the respondents said businesses that provide services for weddings, such as florists, should be allowed to deny service to same-sex couples if the owners have religious objections.

A lot of people are afraid to tell pollsters they’re against Gay marriage because they’ve seen what happened to the California software exec that lost his job because he supported traditional marriage. Support for Gay marriage may be a lot softer than people think.