The Pope Has Picked A Side In America’s Election

Nothing has done more for the world than capitalism. It has lifted people from poverty, from serfdom and from servitude. It has provided a future for people who otherwise would have been born and died in servitude to others. Still, the Pope has embraced socialist Bernie Sanders[1] to ask him to speak on the importance of a “moral economy.” 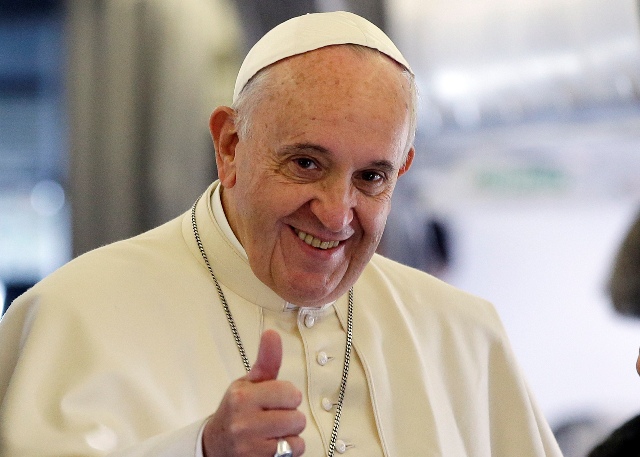 Democratic presidential candidate and middle class crusader Senator Bernie Sanders (I-VT) will be taking a short hiatus from his campaign following the next debate to fly to Vatican City. There, he will join the Pontifical Academy of Social Sciences for a conference[3] with his Holiness Pope Francis on social, economic, and environmental issues.

“I am delighted to have been invited by the Vatican to a meeting on restoring social justice and environmental sustainability to the world economy,” Sanders said in the release. Pope Francis has made clear that we must overcome ‘the globalization of indifference’ in order to reduce economic inequalities, stop financial corruption and protect the natural environment. That is our challenge in the United States and in the world.”

The democratic socialist from Vermont continued to celebrate the invite on MSNBC’s Morning Joe (see video below). “I was very moved by the invitation, which just was made public today,” he said. “I am a big, big fan of the pope. Obviously, there are areas where we disagree, on women’s rights and gay rights. But he has played an unbelievable role — an unbelievable role — of injecting a moral consequence into the economy…you know, people say Bernie Sanders is radical — read what the pope is writing.”

Pope Francis has gained enormous popularity for his progressive ways and his determination to bring the Papacy into the 21st century, to slacken the tight reins of doctrine in the face of a rapidly changing world while still commanding enough moral authority to try to inject some kind of positive emotion and charitable values into the ruthless and predatory anarchy that is free-market capitalism. Senator Sanders has been working towards those same goals from a secular, legislative approach for decades. It’s become a popular joke “that for everything we’ve done wrong in the past thirty years, there’s a video of Bernie Sanders telling us not to do it” – because Senator Sanders has been the harbinger we ignored until it was nearly too late.

The Holy Father and Senator Sanders make a formidable team. They are equally devoted to resolving income inequality, preserving the environment, expanding access to healthcare and promoting peace – not just for Catholics or Americans, but for every human being. It is not many politicians who would abandon their campaign trail days before a key primary, but it just goes to show that Sanders’ ideals are more important to him than winning an election.

Just to clear up any confusion spread by right-wing trolls, Senator Sanders DID NOT invite himself to the Vatican. Reuters has obtained the invitation[4], sent by Monsignor Marcelo Sanchez Sorondo on March 30th.

Do you know what is a “moral economy?” Allowing people to make their own decisions about their future is moral. Refusing to reward the lazy at the expense of the hardworking is moral. Fostering opportunities for people to better their lives and the lives of their family members is moral.

In contrast, socialism, communism and various collectivist ideologies have been responsible for untold misery and oppression.

In this view, it is hard to see how the Pope could embrace Sanders as anything more than a charlatan peddling an immoral philosophy.