I am not a brain surgeon, but as I understand it, it’s often necessary to keep patients awake and alert as the doctor operates in order to assess whether the doctor is strictly in the right spot. If they begin slurring or acting strangely, that can be a sign that the doctor has ventured into an area he or she should not have. One patient chose to display his love of opera as a surgeon removed a brain tumor. Because of his love of opera, the entire operating room was treated to music[1] that others would have to pay money to hear. 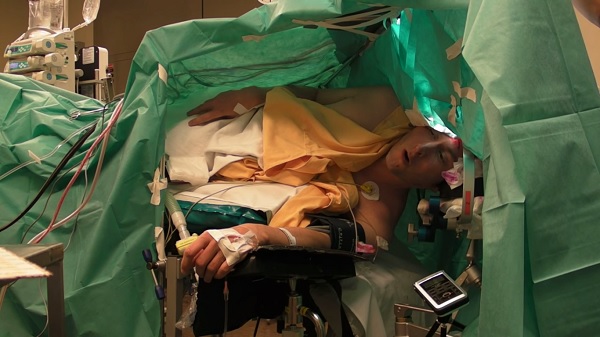 In the video above, which was taken in June 2014, shows professional opera singer Ambrož Bajec-Lapajne singing Franz Schubert’s “Gute Nacht” during his own surgery.

Here’s a bit about awake brain surgery from an earlier post on the blog[3]:

Awake brain surgery is made possible by[4] advanced brain mapping techniques and high-tech anesthetics. These days, doctors are working with a precise map of the brain they’re operating on, and they can use that to successfully extricate dangerous tumors that sit near important brain regions, like ones that control speech, motor function or memory. Meanwhile, the latest anesthetics make it possible to keep patients sedated but awake and talking.

Plus, after testing a patient with questions or fine-motor tasks[5] while applying electrical stimulation[6] to different parts of the brain to see where the vulnerable areas are located, doctors can put them right to sleep for the actual removal, confident that they’ve mapped out forbidden areas.

In Bajec-Lapajne’s case, doctors wanted to monitor his ability to recognize changes in key, since that’s something he relies heavily on for his profession. They were most likely trying to avoid hurting those functions in the course of removing the tumor. Singing is also a good task to help doctors avoid hurting speech areas — which is why some musicians choose to play guitar and sing during their surgeries instead of more traditional tasks like reading and answering questions.

You’ll see something alarming happen around the 2:40 mark: Bajec-Lapajne slurs his words, and his singing slows to a muddy halt. But that’s not an indication of something going wrong, exactly: Surgeons need to know what parts of the brain will wreak this kind of havoc if they’re interfered with. Bajec-Lapajne’s scary moment was exactly the point of the exercise, showing surgeons where not to go during the tumor removal.

And as you can see, he bounces right back to a beautiful performance. Bajec-Lapajne writes on his YouTube page that he’s doing fine a year later, and continues to pursue a career in classical music.

Hopefully, Bajec- Lapajne continues to make a full and speedy recovery and can continue to do what he loves for many more years.