A group of American men found this out the hard way and got a shock – both emotionally and physically – when they found an unattended Mantis Green McLaren 650S Spider and tried to drive it as part of a prank by YouTube star, Joey Salads. This is HILARIOUS:[1] 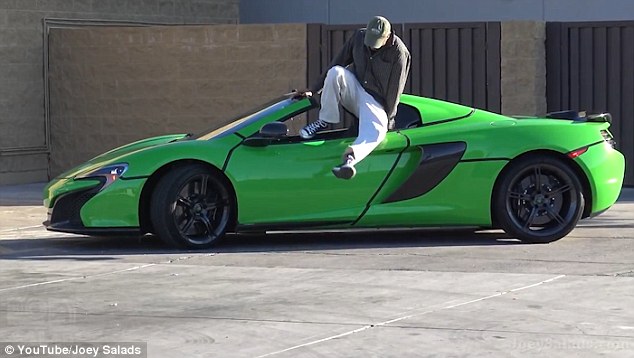 The 22-year-old from Staten Island, New York, had set up the driver seat with the exposed wires from a remote-controlled dog shock collar.

Salads and his friend watch from a hiding place as men approach the vehicle – in which the keys are clearly left out – and then shocks them using his remote control when they attempt to drive it.

The video shows four men being subjected to the treatment.

They all approach the bright green car cautiously, amazed at it being left alone. Some even take photos and selfies.

Meanwhile the pranksters laugh hysterically, thrilled that the joke that gone so well.

YouTube commentators have had a lot to say: ‘How do they not see the go pro right in front of their faces wtf..’;

‘What if someone would have figured it out and just ripped the wires off and drove away’; ‘You really must have nothing to lose if you think stealing a McLaren is a good idea….’