You may have noticed there is a disagreement among Americans about the Texas/Mexico border, and how best to deal with it. Carl Jr., feels the best way to deal with it[1] is with scantily clad models and cheeseburgers… 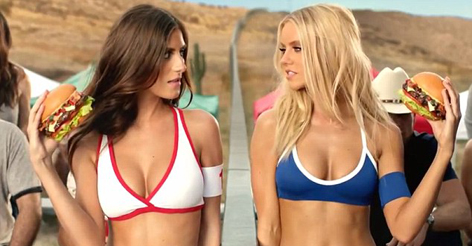 The new ‘Borderball’ ad for TexMex burgers features two scantily clad beach volleyball teams – the all-blonde Team Tex and the all-brunette Team Mex – playing over a border wall between Mexico and the United States. The teams of models, who are wearing tiny bikini bottoms and low-cut sports bras, are competing to decide whether the burger is ‘Tex’ or ‘Mex’.

In the commercial, a member of the American team says: ‘Black Angus beef and bacon? So Tex.’

Watch the video below and judge for yourself. The seriousness of the problems at the border notwithstanding, I’m really in the mood for Tex-Mex right now…