It’s no secret that rap-turned-country star Kid Rock is a huge supporter of Donald Trump[1].

His new, pro-Trump shirts are slightly vulgar, but apparently one record label has an issue with his opinion and posted a nasty Instagram message in an attempt to shame Rock. 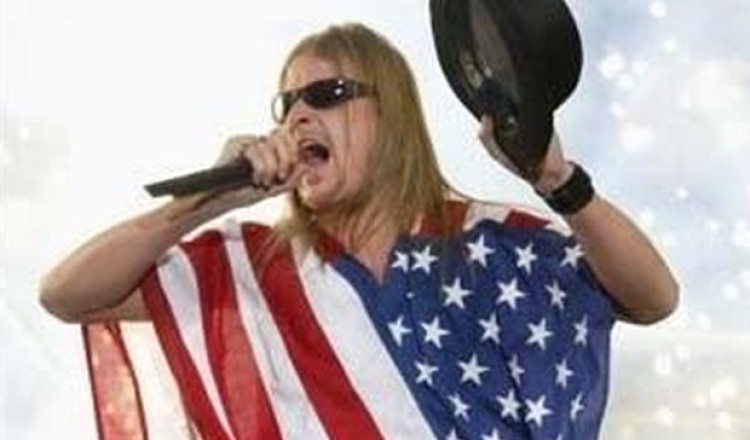 When Sumerian Records noticed that Rock was wearing a pro-Trump shirt, they posted the photo on Instagram with a message that made it very clear that they are “tolerant” of others’ opinions, as long as those opinions aren’t “mean.” Oh, if only the world could be as warm and fuzzy as the utopia in their heads. 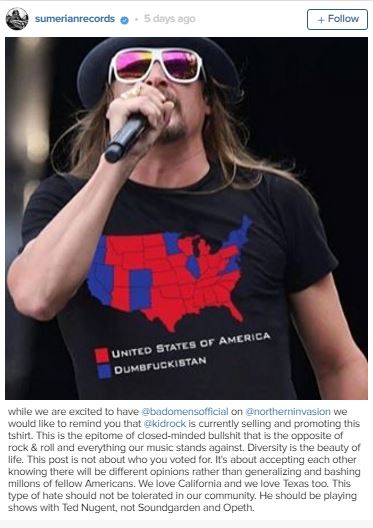 while we are excited to have @badomensoffician on @northerninvasion we would like to remind you that @kidrock is currently selling and promoting this tshirt. This is the epitome of closed-minded bullshit that is the opposite of rock & roll and everything our music stands against. Diversity is the beauty of life. This post is not about who you voted for. It’s about accepting each other knowing there will be different opinions rather than generalizing and bashing millions of fellow Americans. We love California and we love Texas too. This type of hate should not be tolerated in our community. He should be playing shows with Ted Nugent, not Soundgarden and Opeth.

I guess it’s okay to express hate if the target is Ted Nugent, but not if it is someone who voted for Hillary.

Do you support Kid Rick and his right to express his opinion, even in outrageous ways?