Reds outfielder Skip Schumaker is becoming a bit of a hero on social media for reaching out to the family of a baseball fan who died of cancer last week. According to the family, the Reds outfielder (and former Cardinals player) impressed everyone with his generosity and kindness.[1] 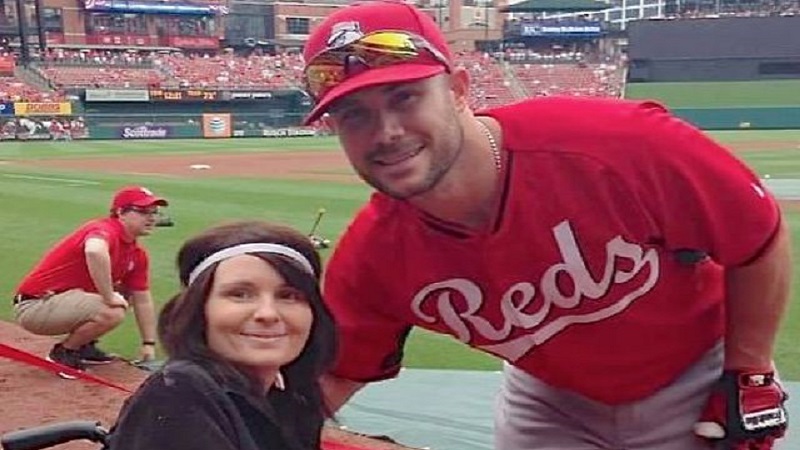 A relative posted on Facebook that Schumaker was the only player who personally greeted Ashlea, a young mother of two, when she was on the field in a wheelchair before a Reds-Cardinals game in St. Louis last weekend.

He signed a ball and took a few pictures,” Ashlea’s sister-in-law said in her post. “Ashlea was so excited that he came to talk to her and I want him to know how much it meant to her and all of her family.”

Ashlea died Thursday after her 10-year fight [with cancer], according to a post.

Someone shared the post on Schumaker’s FB page, and he responded:

“I’m so sorry for your loss. I remember talking to her about her baseball design on her nails. She seemed really sweet and much too young to be gone.”

That thrilled Ashlea’s sister-in-law, who said: “Ashlea told me that he commented on her nails! He is such a great person!”

We need a few more Skip Schumakers in the world, and a few less egomaniacs. Skip’s simple actions (and make no mistake, they are terribly simple) was really nothing more than common courtesy and basic manners… And yet, we live in a world in which such decent behavior is applauded due to its scarcity.

Schumaker has shown he is truly a class act. Unfortunately, that makes him a somewhat rare find in today’s celebrity news.