A family of a boy who was born with a parasitic twin where planning on throwing him into the river before a local hospital volunteered to give the baby [1]free surgery.

Kuli Bai, 22, gave birth to an as of yet unnamed boy at her home in a small village, in Pindwara, northern India. Her family were so aghast by her son’s two extra legs, hand and penis they were just going to drop him in a nearby river. News spread through the village, until it reached Bharat Pal Danda, 35, who runs Matra Chhaya Hospital, in Pindwara, who reacted quickly to retrieve the Mother and son by sending an ambulance before anyone harmed the child.

After removing the baby’s extra limbs and intestines, the doctor has stated that he is doing well and recovering. 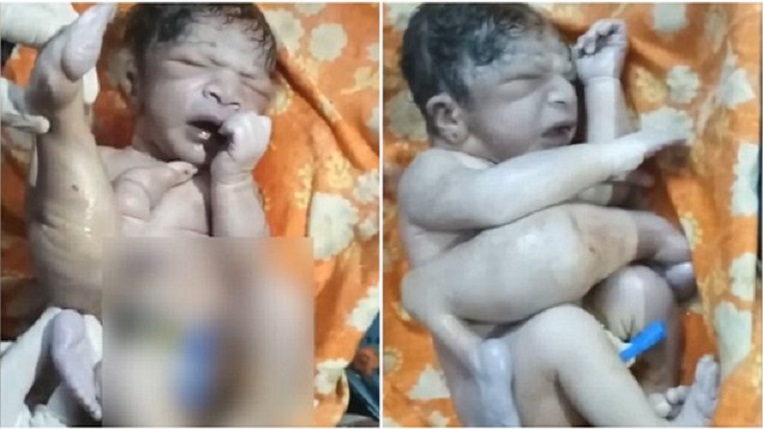 ‘I was very shocked when I heard these relatives, who seem extremely orthodox and superstitious, were planning to kill the baby by throwing him into the river. I couldn’t sit back and do nothing. When they arrived I was upset to see the condition of the child. We did an initial diagnosis and gave him immediate treatment but the child was critical so we referred him to a better hospital.’

The boy was rushed to a government hospital SMS Medical Institute and Hospital, in Jaipur, which was 450 km from Pindwara. A team of four doctors decieded to operate on the baby and successfully removed the baby’s parasitic twin.

Dr Parveen Mathur, senior professor and head of the pediatric department, was teh one to perform the operation.

‘The child had four legs, three hands and two penises. The upper limb of the parasitic twin was underdeveloped. Even though he was internally fine, his condition was problematic due to the attached extra limbs and genitals. We have now removed the extra limbs and intestines that were restricted to the parasitic twin. The boy is currently doing fine but we will continue to keep him under observation for at least a week.’

This story was both fascinating, and disturbing at the same time, and not for the way the baby came out, no, but for the reaction of the family. Yup. Just throw it away…