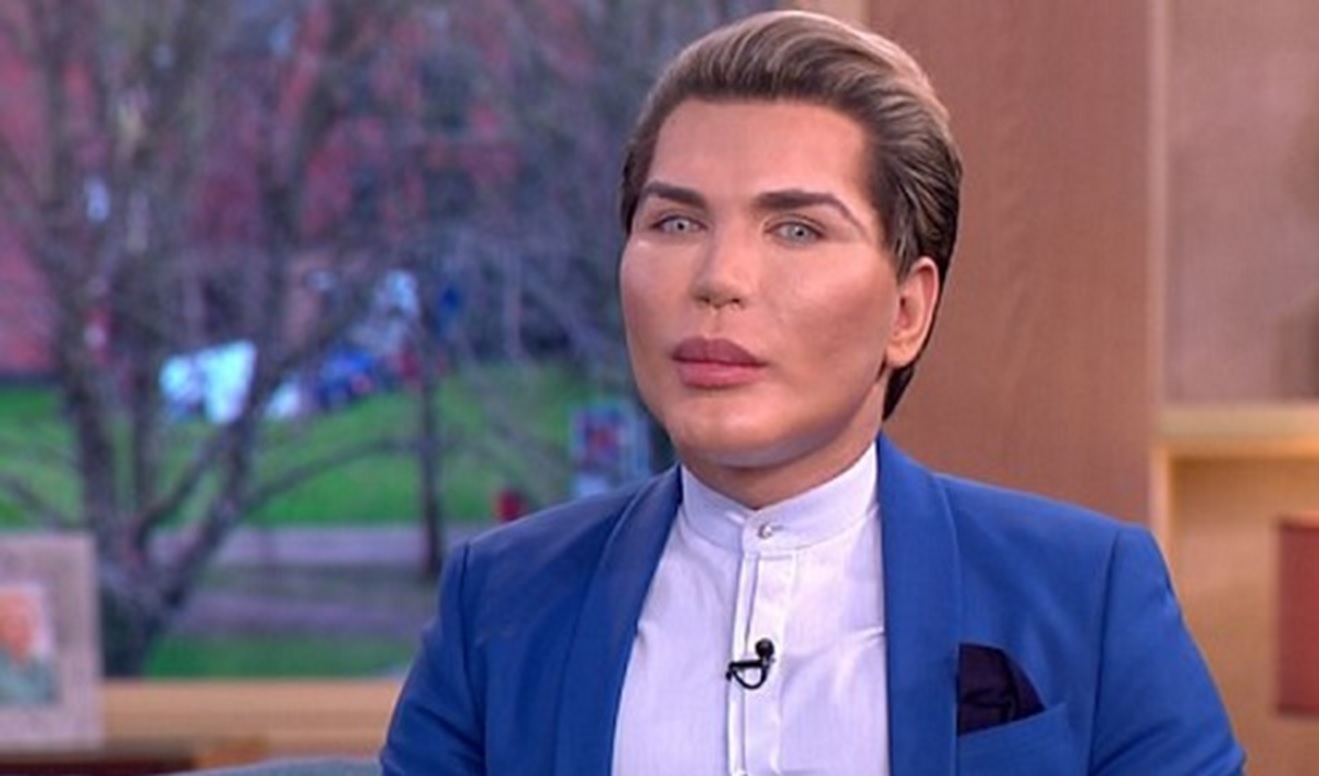 Rodrigo Alves is a “Human Ken Doll”. He’s spent over $400,000 dollars to transform himself into the perfect… uh perfect doll? I guess you would call it a doll. As if he didn’t look creepy enough and after too many surgeries to look like a plastic doll he’s decided that he wants even more surgeries. He even created a video of himself headed to India to have his eye color changed. YEP, I guess you can do that nowadays. In the video, he sounds so happy (I can’t tell if his face is happy because it’s plastic) and he seems completely unaware of WHAT is bout to happen to him in India:

Shortly thereafter Brazilian-born Rodrigo, from London, was forced to return home after surgeons said his eyeballs were too small to hold the artificial iris. Awwww poor thing (and I literally mean ‘THING’). He had planned to change his eyes from brown to icy grey He hit the major news as he spent the long f and had worn contacts until that point. He spent the flight back to the UK drowning his sorrows in champagne on his way home after after doctors refused to carry out the operation to change the colour of his eyes, saying it was too ‘risky’.

Rodrigo has spent tons of money on more than 150 body-changing operations and procedures from liposuction, six-pack implants and botox fillers. My big question is… WHO is paying for all this garbage? The news report says he’s a “TV presenter” but honestly… who could even look at this guy on a TV? I know I couldn’t.

He cried that the ‘The doctors said my eye chamber is too shallow. I’m very upset and I have been crying a lot. It is frustrating because I was really looking forward to it, but I appreciate the doctors have to take safety very seriously. If I go on a date with someone and it eventually developed into more, the person will expect me to wake up in the morning with blue or light eyes – but not brown. I suppose it’s just one of those things.’

Interestingly, eye-colour changing cosmetic implants have only become possible in the last few years. While the procedure is not illegal in the UK, eye surgeons strongly recommend it isn’t done on healthy eyes because of potential risks like glaucoma, blindness and wonky pupils. The operation is performed by surgeons cutting a 2.8mm slit and ‘slot in’ and artificial iris. YIKES. Rodrigo wanted to replace his hand painted £500-a-time contact lenses he has been wearing for nearly 20 years.

Sorry snowflake, I guess there’s one part of your body that will have to be natural and I hope you can come to terms with this horrible trial of the surgeon rejecting you. Gag!