Border patrol agents have been doing their, job, apparently.

But no one gets to know?

What is wrong with this picture? Why are we not hearing this information? 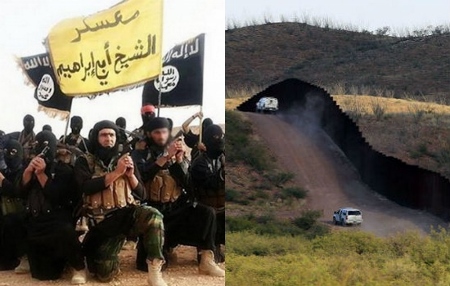 According to this report[2], ILLEGALS ARE BEING CAUGHT AND ‘DISAPPEAR’ – the information is being withheld from the public – simply because THEY DON’T WANT US TO KNOW!

According to Texas rancher Cuban “Rusty” Monsees, Mexican drug cartel members are wreaking havoc on the ranches near the border and using death threats and textbook intimidation to drive ranchers off their land.
In an interview with Oathkeepers,[3] Monsees revealed:

“We get kids. We get adults. The cartel is bringing across, importing people from as far away as the Mediterranean. I’ve talked to agents and they picked up some characters from Somalia, Iran, Iraq, Syria… anything that you can think of these agents are having to deal with.”

It gets worse: in the same in interview, Rob, an Oathkeeper who has come to help protect Rusty and his ranch from the invaders, claimed that Border Patrol has captured wanted terrorists, but have been unable to release that information to the vulnerable public. Rob explained,

“[They] had six middle eastern males on Rusty’s property [which Border Patrol was able to catch] … all I know is they were Muslim. I wasn’t told a whole lot of information about it. I do know they had told me they had caught eleven of the same group, the week prior to that, that had been on our United States terrorist wanted list [for acts against the United States] – not watch, but wanted list. And this is the kind of stuff that they are not releasing to the public, they’re not allowed to release it.”

“They were caught and they were turned over to Homeland Security, and everything pretty much disappeared like what Rusty was saying. None of that is any public information or anything like that, so they don’t want it to be public. [the BP is not allowed to tell anyone that known terrorists are coming across the border]. They aren’t allowed to speak about it. The only thing we [the American public] hear about is women and kids… and when they make huge drug busts, that’s what we hear about. We don’t hear about the gang-bangers coming across, we don’t hear about the terrorists coming across. We don’t hear about the violence going down on the border. I had a rancher call me last week, and begging for help on 15,000 acres. He had been moved off his ranch because he doesn’t feel safe with his family there. He’s been shot at and threatened. We don’t hear that [on the news].”

The liberal media, in conjunction with The Obama administration, continues to attempt brainwashing the American public that we are not being INVADED by gangbangers and criminals. The fact of the matter are that American landowners are being forced to arm themselves to protect their property, and that women and children are not the only people coming to America. We have to wake up and defend ourselves before we are absolutely overrun. Defend America, before it’s too late.
Endnotes: