Report: As Many As 1,000 Syrian Rebels Vetted By The Obama Admin Have Already Joined Al Nusra Front

Another failure! So much for those “moderates” that John McCain & Obama said it was safe to give sophisticated weaponry.[1] 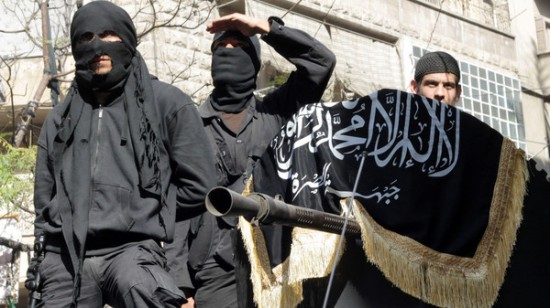 So much for those “moderates” John McCain told us over and over again how we should be giving them sophisticated weaponry.

REYHANLI, TURKEY — The United States has stopped paying most of the pro-western rebels fighting in northern Syria and has suspended the delivery of arms to them, rebel commanders told McClatchy Tuesday.

A top civilian coordinator for rebel forces estimated that the cutoff affects 8,000 of the estimated 10,000 fighters in Idlib and Hama provinces, where the so-called moderate rebels face a severe challenge from the Nusra Front, al Qaida’s affiliate in Syria.

Commanders said CIA operatives told them the cutoff was the U.S. response to the Nusra gains, which have included the seizure of U.S.-supplied weapons from moderate rebel forces in recent weeks.

The commanders predicted the cutoff will only strengthen Nusra as fighters desperate to feed their families join Nusra or the Islamic State. […]

As many as 800 to 1,000 fighters from U.S.-vetted rebel groups already have joined Nusra, she said.

Is anyone seriously shocked by this? While we are trying to help the “moderates”, they are sitting back and laughing at us. When is the time going to come when we call it like it really is?