Report: Obama to Announce Plan to Bring Gitmo Prisoners To America Next Week 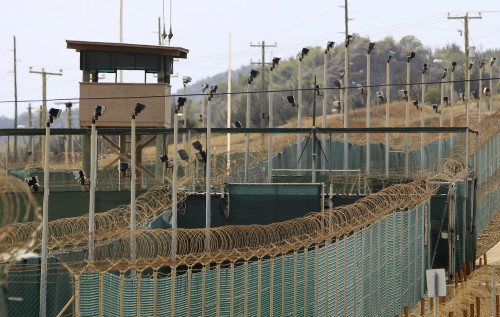 Coming soon to a prison near you? Some of the most dangerous criminals and terrorists [2]in the world are housed at Guantanamo Bay. And apparently it’s not going to stay that way. No, our President wants them on the US mainland. Read on to see the plan and the excuses put forth by President Obama. Do you agree?

The Obama administration is reportedly going to announce plans to close Gitmo next week. The far left president still believes releasing prisoners and bringing the rest to the US will keep America safe.

Barack Obama released the 20th 9-11 hijacker in September from Gitmo.

Abdul Rahman Shalabi was trained as the 20th hijacker in the 9-11 attacks.

According to US, assessment teams have visited the Navy Brig in Charleston, SC, Ft. Leavenworth, KS, the Centennial Correctional Facility in Canon, CO, and the federal SuperMax prison in Florence, Colorado.

“
The Pentagon is expected to release a plan next week on President Obama’s years-long effort to close the Guantanamo Bay detention center that suggests a Colorado prison dubbed “the Alcatraz of the Rockies” as one suitable site to relocate expected life-long detainees, Obama administration officials say.

Obama made a campaign promise in his 2008 White House bid to close the facility, arguing the move would be in the United States’ best financial, national security and foreign policy interests and in the name of justice — considering some of the detainees have been held for nearly nine years without trial or sentencing.

However, critics of the promise, including many Republicans, fear transferring detainees to the U.S. mainland as part of an overall closure plan poses too much of a homeland security risk. They also say the president has yet to submit a closure plan and have been critical of the administration recently allowing some known terrorists to return to the Middle East.

The Florence, Colo., prison is among seven U.S. facilities in Colorado, Kansas and South Carolina being considered.

The Pentagon plan represents a last-gasp effort by the administration to convince staunch opponents in Congress that dangerous detainees who can’t be transferred safely to other countries should be housed in a U.S.-based prison.

Why leave terrorists safely in an offshore prison when you can bring them here instead? That seems to be the rationale of the President and his allies. These prisoners are enemies of the United States. They should stay where they are, where they pose the least threat to US citizens. But as always, the Left is naïve when it comes to those who threaten our citizens. After all, hasn’t Obama already sent several terrorists back home to pick up right where they left off?