If you were searching for another reason to loathe the self-avowed Socialist Bernie Sanders, we’ve got it. While Jeb Bush, Lindsey Graham and Donald Trump all cancelled events at various locations following the tragedy in Charleston, SC., Sanders held a union rally[1] on the grounds of the U.S. Capitol close to where mourners were gathering to remember the nine lives lost in the church shooting. After wide-spread criticism, the campaign finally cancelled the scheduled union rally on Sunday in Charleston. 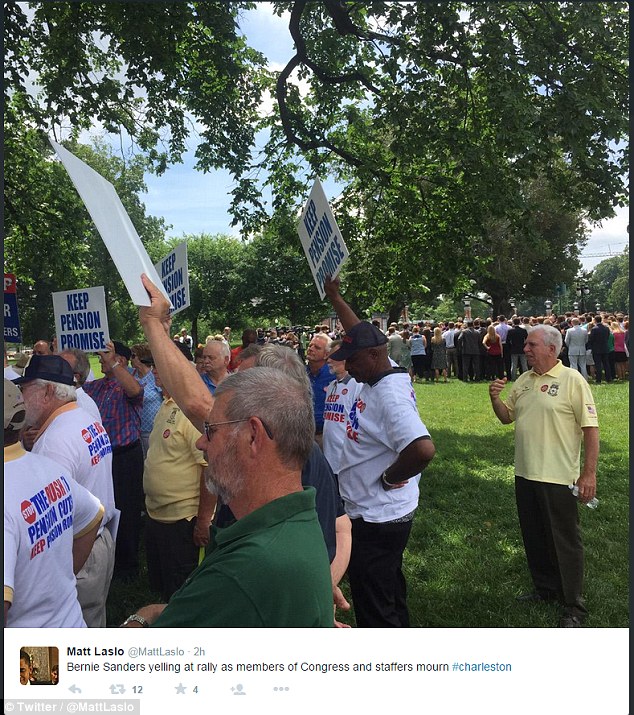 Three Republican presidential candidates announced Thursday that they had canceled campaign events in the wake of a mass shooting in a Charleston, South Carolina church on Wednesday night.

But Vermont Democratic Sen. Bernie Sanders risked incurring the wrath of mourners Thursday afternoon by holding a planned rally about pension benefits on the grounds of the U.S. Capitol as mourners grieved.

Just yards away, members of Congress and their staff were holding a memorial observance to honor the nine people killed in the massacre.

After broad criticism, the Sanders campaign late Thursday afternoon canceled a Sunday rally scheduled for Charleston, despite booking a larger venue for it earlier in the day.

A white gunman opened fire just after 9pm in a historic African-American church in Charleston, killing nine and wounding three others. The suspect, Dylann Roof, is in police custody after his capture Thursday in Shelby, North Carolina.

The large group gathered on the Capitol lawn had to compete with Sanders’ rally of union members demanding better protection of their pension benefits.

Photos on Twitter show Sanders speaking to cameras while labor supporters hold signs behind him. In the near distance is a sea of people gathered to honor the shooting victims in a large prayer circle.

This reeks of selfishness and idiocy. At best, this was poor decision making, at worst, it was a purposeful spit in the eye to sufferers.
Endnotes: