Among those outraged at the President’s comments about Christianity made in flagrant bad taste is the son of evangelist Billy Graham. Rev. Franklin Graham took to Facebook Thursday to rebut the ignorant claims made by our own President.[1] 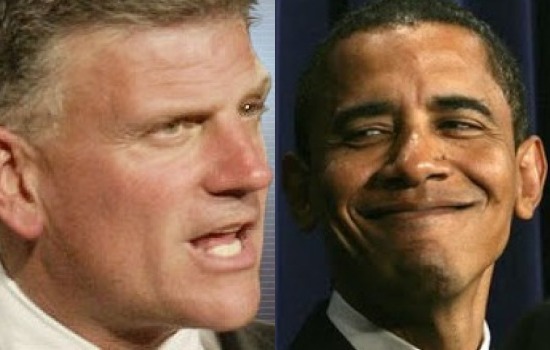 At the National Prayer Breakfast (of all places) on Thursday, Obama attempted to compare Christianity to Islamic terrorism, in order to prop up the religion of Islam, lecturing American’s to get off “our high horse.”

Trying his hardest to pull a “everybody does it,” Obama suggested that the horrific tragedies being committed by Muslims, using specific scriptures from the Koran that justify their acts of violence, should somehow be downplayed because of events, specifically The Inquisition and the Crusades, that happened 500 and 1,000 years ago, respectively.

“Unless we get on our high horse and think this is unique to some other place, remember that during the Crusades and the Inquisition, people committed terrible deeds in the name of Christ,” Obama said at the 2015 National Prayer Breakfast, while also flashing the race card by stating that Jim Crow laws and slavery were “justified in the name of Christ,” rather than the Democrat Party.

Christian evangelist Franklin Graham took to Facebook on Thursday to respond to Obama’s outrageous statement, educating Obama about the difference between the two religions.

“Today at the National Prayer Breakfast, the president implied that what ISIS is doing is equivalent to what happened over 1,000 years ago during the Crusades and the Inquisition, Rev. Graham wrote. “Mr. President — Many people in history have used the name of Jesus Christ to accomplish evil things for their own desires. But Jesus taught peace, love and forgiveness. He came to give His life for the sins of mankind, not to take life.”

“Muhammad on the contrary was a warrior and killed many innocent people. True followers of Christ emulate Christ — true followers of Muhammad emulate Muhammad,” Graham, whose father is legendary evangelist Billy Graham wrote.

You can rest assured that if one Christian killed a Muslim for any reason, the media would be covering it endlessly; claiming it’s proof that Christians are, in fact, just as bad as the Muslims say. The amount of absolute stupidity and historical ignorance expressed by our President should shame any and everyone who voted for him.