Rev. Graham to Students Who Called for ‘American Sniper’ Cancellation: If You Can’t Support our Military, Move to a Muslim Country

When the precious little flowers at University of Maryland couldn’t handle the life of Chris Kyle as portrayed by Bradley Cooper, they protested the showing of ‘American Sniper’[1] at their college. The outrage and incredulity that ensued had several people speaking out. One of those people is Rev. Franklin Graham, who had this message for the students: 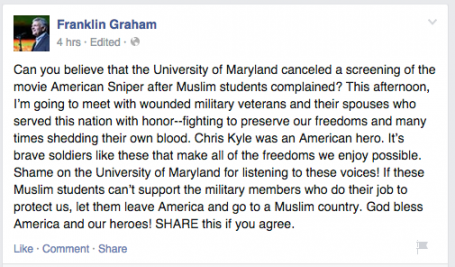 In response to the University of Maryland’s decision to cancel a screening of the hugely popular movie “American Sniper” because the school’s Muslim Students Association objected, calling it Islamophobic and nationalist, Reverend Franklin Graham said the sniper, Chris Kyle, “was an American hero,” and if “these Muslim students can’t support the military” who protect us, “let them leave America and go to a Muslim country.”

“Can you believe that the University of Maryland canceled a screening of the movie American Sniper after Muslim students complained?” said Rev. Graham in an Apr. 24 post [4]on Facebook. “This afternoon, I’m going to meet with wounded military veterans and their spouses who served this nation with honor–fighting to preserve our freedoms and many times shedding their own blood.”

“Chris Kyle was an American hero,” said the reverend, son of evangelist Billy Graham. “It’s brave soldiers like these that make all of the freedoms we enjoy possible. Shame on the University of Maryland for listening to these voices!”

“If these Muslim students can’t support the military members who do their job to protect us, let them leave America and go to a Muslim country,” he said.  “God bless America and our heroes! SHARE this if you agree.”

In a petition[5] it sponsored to halt the screening of the film, the Muslim Students Association said “American Sniper,” which has grossed $541.3 million worldwide so far, is “war propaganda guised as art [that] reveals a not-so-discreet Islamophobic, violent, and racist nationalist ideology.”

Fox News’ Todd Starnes reported[6] on Apr. 23 that the University of Maryland had decided to “postpone indefinitely” a screening of “American Sniper.”

Franklin Graham, 62, is the president of the Billy Graham Evangelistic Association and the international Christian aid group Samaritan’s Purse. He frequently speaks out against the intolerance and dangers of radical Islam.

It is because of our military that these cupcakes have the freedom to protest in this country. They need to learn to respect the men and women over seas, even if they don’t agree with the actions of the government. Our soldiers have more courage in their fingernails than these kids do in their bodies. If they get so easily offended by a movie, the real world just going to kill them.