REVOLTING: Harvard Law Students Show a Lack of Intelligence in Disrespecting the Flag

Harvard students are supposed to be the best of the best; who young college-bound kids look up to. But now-a-days, most people would rather strangle themselves with a wet noodle than attend the bastion of unbridled progressivism that is an Ivy League school. A photo posted on Reddit[1] is causing a great deal of controversy, with most users pointing out how poorly research this little project was. 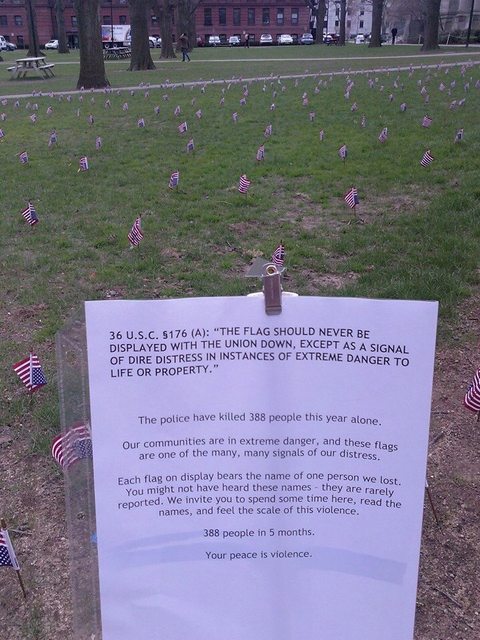 Alcohol related fatalities are at 30 people per day. Not driving, but driving related and alcohol related, at the same time. That’s 1% of the population. Or…a 2,000 percent increase.

Of the 388 killed by cops, how many were justified? It’s easy to point out the MSM plastered over TV, which present very terrible cases. But there are very real times when LE must use lethal force.

Why am I using a comparison? Because they’re also being dishonest. They’re using the total deaths to represent the few and unfortunate deaths to make a point that there is a problem.

The point is…in a country where there are 318,000,000+ people and where the police force totals 1,000,000 and where we’re demanding cutbacks on programs there are going to be unfortunate cases that occur. Sorry to bust your bubble, but that’s the downside to big numbers. That’s real life. When there are over 318 million people and 12 million plus are arrested annually…there are going to be cases of lethal force. And of the lethal force cases, there are going to be cases of misconduct when the volume is that high. Adjusting for this, that means that out of around 6 million arrests this year, 388 ended up in death. That’s still .006% ending in death and this still accounts for ALL deaths, not just misconduct and justified.

So far there have been about 20 misconduct cases this year. or .0003% of the 6M arrest resulted in misconduct.

I get it that every life is precious, but no job is 100% accurate all of the time. Protest that housing is hyper-inflated by around 200%. Protest that CEOs have increased their profit margin by 1,000% or more.

But this national news over exceptionally isolated incidences is just blatant in your face misdirection. The media knows it entices emotion, anger, and opinion. That’s why they put it in your face. It easy for them to do because a single police case in Maryland can be instantaneously broadcast to my state (NM) within minutes. It creates the illusion that it’s endemic. Let the locals handle the problem. But don’t think that it’s everywhere, all of the time. They’re isolated incidences, nation wide, and constantly pushed to keep you looking over your shoulder rather than in front of you.

I’m getting a lot of messages and I hear you. First I was a little buzzed two hours ago and was just typing away..that said, I used the death numbers from OPs post.

I’m not a statistician or even really super interest in baltimore. I just saw something I wanted to rant on and went for it.

The statistics for ALL of it are completely and mind numbingly complicated. Justified/unjustified….committing a crime/not (by-stander hit?), video or witness..was it a police witness, what was the police record?…1st, 2nd 3rd firearm discarge? Because this is race based….what is the ratio of all people in the US…what is the ratio of cops…what is the ratio of white killing black, hispanic, asian….asian killing white, black, asian…black killing black, white, asian, hispanic.how many cops have killed someone who wasn’t even a US citizen (visiting?) Because we simply can’t get all of these numbers because not all police deaths are documented to agencies outside..and even when they are…not all of the above is even included. If you want to be the hero that can collect the most comprehensive chart of all police, demographics, time on PD, who did the killing, who died, what was the outcome etc…then post it. I’d read every word.

I get that it is possible (and absolutely necessary) for people to worry or advocate for one reason or another. It’s needed. Police misconduct shouldn’t just be low..it would be nice if it was winning the lottery low..that’s without saying. But I think the buzzed typing me didn’t make my point clear.

The point I was trying to make is simply….there IS ALWAYS a point where there is some failure..and it’s met with an acceptable level of failure. We can’t eliminate all of the failure for anything, ever. That said, “we” should stand on issues and push topics that have gotten out of control until the failure rate is within reason. It’s unpleasant to say it, but at some point, an accident or just plain outright brutal and disgusting act will occur. The message behind it was that for me….I feel that overall, that the number of police killings per year is actually really low. It’s amazing that with all of the bullets fired, fewer than 1,000 a year are killed annually. I don’t want to say that it’s expected…but..it’s going to happen. When you have people who have guns and a job to stop bad guys…that ability will be used and when you have 12+ million people being arrested…some of those bad guys will likely turn out to be good guys treated terribly by supposedly good guys. And when there are 300 million people in the US…if only 1% are upset with the 100% of news coverage of this story, then you’ve got 3 million people pissed off. The problem with the media coverage is that any instance in this country can be broadcast to all states in the time it takes to set a camera up. There are people in Nevada, right now, talking about how to/not to approach cops because of what they see going on over 1,000 miles away. There is probably an apartment in South Dakota with a group of teens seething at the thought of this happening in their town…and what they might do. This is the problem with media saturation. It’s giving the appearance that >1,000 deaths (in any category listed above) is representative of the entirety of the problem…when it’s likely that fewer than 200 people lost their lives wrongfully. And to me that should equal around 200 firings. Carrying it further down…of those 200 wrongful deaths, maybe 80 are considered justifiable because of the toxic police force that enforces the conduct. And I feel that in the scenario where 12M people are arrested….80 people killing and getting away with it is discussion worthy…but not burn down a city and cover it 24/7 worthy. It’s marginalized occurrences that does happen…but it’s very very unlikely.

So what do you guys think? Do you support these Harvard students, or do you think that their misinformed and under-researched project was better left on the drawing board?