When it comes to the Army, there are a lot of degrading chores you’re forced to do.  Being pressured to walk in heals for an event against Sexual Violence? Some think that crosses the line[1]. 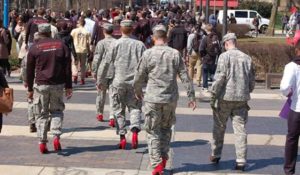 “Army ROTC cadets are complaining on message boards that they were pressured to walk in high heels on Monday for an Arizona State University campus event designed to raise awareness of sexual violence against women.

The Army openly encouraged participating in April’s “Walk A Mile in Her Shoes” events in 2014, but now it appears as though ROTC candidates at ASU were faced with a volunteer event that became mandatory.

“Attendance is mandatory and if we miss it we get a negative counseling and a ‘does not support the battalion sharp/EO mission’ on our CDT OER for getting the branch we want. So I just spent $16 on a pair of high heels that I have to spray paint red later on only to throw them in the trash after about 300 of us embarrass the U.S. Army tomorrow,” one anonymous cadet wrote on the social media sharing website Imgr, IJReview reported Monday.

In a Reddit Army thread on the subject — titled “Okay, who put the cadets up to this?” — one user said the claims were legitimate and added, “I just don’t understand why [General] Combs would court political controversy like this. Isn’t the military supposed to avoid faddish political movement and religious issues.”

Another user pointed to an Imgr post saying that while everyone had to be there, cadets could show up in appropriate civilian attire.

The Army has not tried to hide from the event. It promoted similar events in 2014 on its website, saying “Walk a Mile in Her Shoes is open to everyone. We are trying to get maximum participation and even if they can’t be there, we still encourage them to make a donation.”

It is great that the Army is trying to bring awareness to this issue, but is heels the only thing they could come up with?  Give the guys credit for being good sports though.  Maybe this little stunt will help them to prevent that sort of violence in the future.