Roger Goodell take Note: There’s no pleasing Liberals out to destroy the NFL

Roger Goodell, a good Liberal, might be learning a painful lesson that he’s joined the ranks of 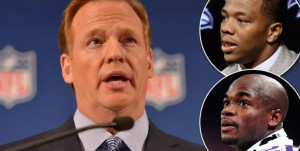 [1]Wal*Mart, the Koch brothers, and Republicans as enemies of the Leftist world.

No amount of apologies will ever be enough. Ask Don Imus.

No amount of football players wearing pink will ever placate Feminists calling for his head.

The NFL has become a whipping boy because Leftist are unhappy the Washington Redskins are still called the Washington Redskins. It doesn’t matter to Liberals that poll after poll show that an overwhelming majority of Americans have no problem with the term “Redskins”. The media doesn’t like it and their opinion should carry the day.

My advice to Goodell is to hold firm and tell these sanctimonious Libs to go take a flying leap.

The NFL is supposed to be an escape, an entertainment, a diversion from the drudgeries of life. But bored bleeding heart sportswriters like Mike Lupica and blowhards like Mike Franesa want to inject social issues into the game. What there isn’t domestic violence or child abuse among sportscasters, sports talk hosts, or sports analysts? Is it too much to want to hear about the game instead of a player’s personal life?

Libs are like a dog with a bone. Hold fast Goodell, hold fast!