Rudy Giuliani: Trump campaign has a couple of surprises left . . . It Will Be ENORMOUSLY Effective”

According to the polls, Republican Presidential nominee Donald Trump is going to need as much help as he can get before November 8th. Rudy Giuliani seems to think that the Trump camp still has an ace up their sleeves and it will essentially assure him the Presidency.

While he didn’t give away any details, he ensured that the “surprises” that were still held by the Trump campaign would be “enormously effective.” They’d better hope so. 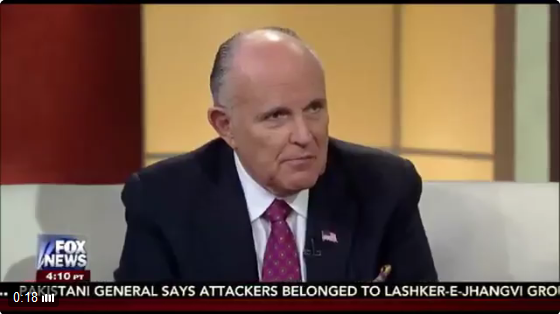 Giuliani was on Fox and Friends[2] when he made the announcement that Trump isn’t conceding the election just yet, but he wasn’t giving anything away, despite being asked to spill some details by Brian Kilmeade.

“We got a couple of surprises left,” Giuliani shared. “Surprises in the way that we’re going to campaign to get our message out there. Maybe in a little bit of a different way. You’ll see. And I think it will be enormously effective.”

But in general elex, law of political gravity reasserted itself, with a vengeance. Gaffes, past, mistakes hurting Trump badly.

On stump, Clinton is following all the rules that Trump ignores. Yes, it's boring. But she is plodding into lead. https://t.co/DZXpLtFUmg[4]

It’ll be interesting to find out what, if any, “surprises” the Trump campaign has left considering it looks like he’s completely run out of steam and is letting WikiLeaks do his campaigning for him.