When Ben Carson received backlash for his thoughts on putting a Muslim in the oval office, Rush Limbaugh had to say something about it…and what he said SHUTS DOWN[1] any attempt the media makes to use this as another tool to call out Conservatives as bigots! 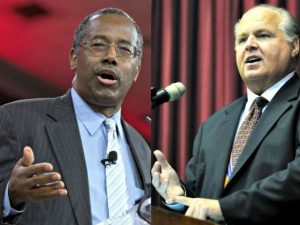 During a September 20 appearance on NBC’s Meet The Press, Republican presidential candidate Ben Carson voiced his opposition to a Muslim holding the office of the President of the United States.

On September 21 Rush Limbaugh addressed the media’s backlash against Carson by asking how people fail to note that sharia law and U.S. constitutional law are mutually exclusive?

In regard to religion, mutual toleration in the different professions thereof is what all good and candid minds in all ages have ever practised, and, both by precept and example, inculcated on mankind. And it is now generally agreed among Christians that this spirit of toleration, in the fullest extent consistent with the being of civil society, is the chief characteristical mark of the Church. Insomuch that Mr. Locke has asserted and proved, beyond the possibility of contradiction on any solid ground, that such toleration ought to be extended to all whose doctrines are not subversive of society. The only sects which he thinks ought to be, and which by all wise laws are excluded from such toleration, are those who teach doctrines subversive of the civil government under which they live.

Limbaugh contends that the incongruity between sharia law and constitutional law are obvious to the honest examiner and that the media’s “outrage” over Carson’s statement is “manufactured.” He said the criticism of Carson is “made up just like the Trump furor was.” Moreover, he says “the furor is not [even] about this specifically, but it’s about giving the media another chance, or better stated, the media taking another opportunity to point out in their minds that Republicans are bigots.”

Stupid media…tricks are for liberals.