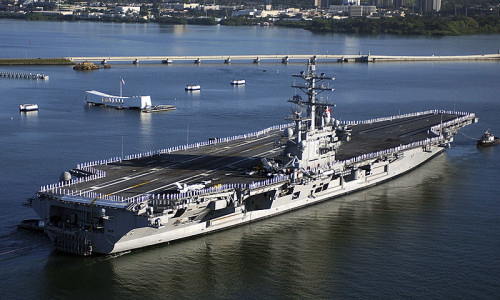 When we are used to being led by weakness and indecision, the news that Russia is being militarily aggressive [2]comes as no surprise. When sharks smell blood in the water, they always go after it. Do you remember a time when our leaders would never have tolerated this behavior from another nation? Anyone who had the privilege of seeing Ronald Reagan in action remembers very well what strong leadership looks like. But sadly his namesake ship is being used in a high stakes Russian game of cat and mouse.

A U.S. aircraft carrier is the superior display of our strength and power projection. It is a floating example of American sovereignty, and represents the finest and greatest traditions of the U.S. Navy. Having one’s name affixed to a Navy aircraft carrier is undoubtedly the highest honor. And so it is with the venerable USS Ronald Reagan, named after the man who stood at the Brandenburg Gates and forcefully demanded of Soviet Union leader Mikhail Gorbachev, “Mr. Gorbachev, tear down this wall.”

The USS Reagan was sailing in international waters east of the Korean peninsula, Stars and Stripes reports.

The Russian “Bear Bombers” approached the aircraft carrier at an elevation of 500 feet Tuesday morning, according to Navy spokesman Commander William Marks. He said U.S. F/A-18 Super Hornets escorted the Russian planes as they transited out of the area. “We would characterize this as still at a safe distance. This kind of interaction is not unprecedented,” Cmdr. Marks told Fox News.”

This is not unprecedented?

Apparently, since President Barack Obama’s “unprecedented” off-mic moment when he confided to then Russian President Dmitry Medvedev — ironically in South Korea — that he would have more flexibility after reelection, we’ve been treated to more Russian tricks of buzzing our ships, flying off our coastline, and the recent reports[4] of Russian submarines dangerously close to underwater internet cables. But don’t fret, this kind of interaction isn’t unprecedented.

So Russia can buzz our carrier off the coast of South Korea. They’re deploying and establishing military bases in the Arctic[5]. Their paramilitary forces have overrun the Crimea and taken over good portions of eastern Ukraine. Russia can deploy ships that transit along the U.S .coast heading towards Cuba and its submarines are patrolling near communications cables in the Atlantic. And don’t forget, Russia is deploying forces into Syria.

The commander-in-chief has decimated our naval strength to the point that for the first time since 2007, America had no carrier battle group (CVBG) coverage in the Persian Gulf.

Thanks to the ill advised actions of our current Commander-in-Chief, this nation is hemorrhaging military power and the results can only be a weak and sickly defense. We need a transfusion before the sharks get the best of us. Let’s bring new courageous blood, a President who believes in a strong military, to the Oval Office next November.