It is almost a miracle that this Russian plane and American jet did not collide, creating a mid-air disaster which would have swept the news airwaves around the world.

However, the video below is catching headlines anyway. Watch the incredible footage here: 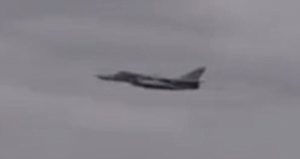 A Russian fighter jet hurtling through the air and hundreds of miles per hour came within ten feet of smashing into an unarmed U.S. Air Force plane in the skies over Europe.

The American plane, fitted only with cameras, was patrolling international airspace above the Baltic Sea, when it had a close encounter with the Russian aircraft.

According to Pentagon officials, the planes met in midair on May 30. The Russian pilot flew alongside his U.S. target at the same altitude – coming almost within touching distance.

The Pentagon said the US jet was nowhere near Russian territory, shooting down claims that the jet turned around because it was near Russian soil.