Sailor Stunned When Woman Insults Him in Public, Then He Hears Voice Behind Her

As Americans, we are free to be critical of U.S. foreign policy. We can criticize the use of military intervention. Heck, we can even dislike individual soldiers. However, we reside in a country protected by those who pick up guns so that the rest of us have the freedom to not have to- and that demands a certain level of respect. Unfortunately, this young sailor hasn’t been getting a lot of that lately[1] from citizens who should be more grateful for his service: 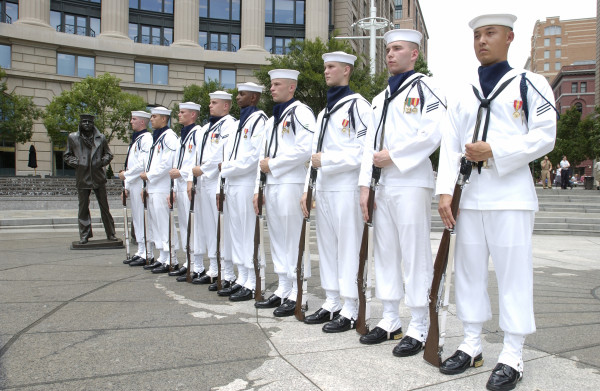 Last month, the Conservative Tribune wrote about[3] a member of the American armed forces who was insulted in public by a rude customer and accused of being “entitled” just because he asked a cashier if her restaurant offered a military discount.

“No, ma’am,” the soldier told the rude customer. “It’s a discount not a privilege. A privilege is being able to go home to your family every night while living in a free country because some people willingly give up their ‘privileges’ so people like you can have them.”

Another customer who overheard everything then graciously offered to pay for the soldier’s meal.

Fast forward to last week, when the Independent Journal Review[4] finally revealed the identity of this soldier: Aaron Lesseski, a Navy submariner who had only been in the force for a little more than a year, but who had in that short span of time been insulted in public twice.

“When I was stationed in Charleston, SC a lady called me and some of my shipmates ‘murderers’ and ‘hypocrites’ because we ‘unnecessarily’ kill others for the defense of our own,” he explained.

Such disrespect gets under his skin, and for good reason.

“I believe everyone who serves HONORABLY in any branch of the military — Army, Navy, Air Force, Marines, Coast Guard –Active, Reserve, Full Time Support — every single one of them deserve the utmost respect and appreciation, whether they served during wartime or not,” he argued.

He added that he came from two previous generations of military service[5] and that he didn’t choose to sign up just for the military discounts.

“If anyone says that what we do is unimportant, or we just do it to receive benefits, then they’re wrong,” he said. “Who would give up being with their family or being away from the ones we love or constantly uprooting our families to move around just for a 10% discount a Buffalo Wild Wings?”

That any American would think otherwise of the upstanding men and women who put their lives on the line to uphold the freedoms we take for granted is just unfathomable — though it is also perhaps, and rather sadly, a sign of the disturbing times[6] in which we live.

Thankfully, we have come a long way as a nation from those dark days where people would spit on soldiers returning from Vietnam. Still, we have a long way to go.

Criticism is fine and even encouraged in a free society. We are all entitled to our opinions. But perhaps with regards to service members, we can abide by mom’s old rule: “If you don’t have anything nice to say, say nothing.”