Relax PETA! Sarah Palin went after People for the Ethical Treatment of Animals on Saturday, telling the group to “chill” after it described a photo she posted as inappropriate.[1] 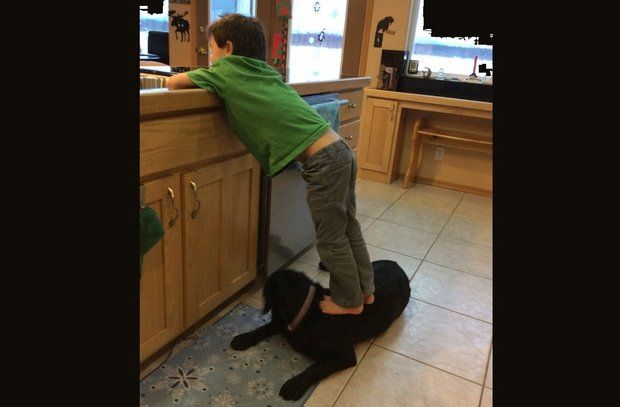 Sarah Palin went after People for the Ethical Treatment of Animals on Saturday, telling the group to “chill” after it described a photo she posted as inappropriate.

Palin sparked controversy from animal rights groups on New Year’s Day when she posted a photo of her youngest son, Trig, standing on the family’s black labrador retriever in order to reach over the counter.

PETA President Ingrid Newkirk described the photo in a statement to Politico as demonstrating “no apparent sympathy for the dog in the photo.”

“Then again, PETA, along with everyone else, is used to the hard-hearted, seeming obliviousness of this bizarrely callous woman,” Newkirk said.

Palin’s post seemed unfazed by Newkirk’s statement, and challenged her on a so-called double standard for not calling out Ellen Degeneres for a similar photo.

The former Alaska governor then pivoted to PETA’s relationship with the 44th president: “Did you go as crazy when your heroic Man-of-Your-Lifetime, Barack Obama, revealed he actually enjoyed eating dead dog meat?”

Palin then proceeded to assail PETA for their treatment of the Alaska fishing industry, the Iditarod dog sled race and the beef industry.

“Yeah, you’re real credible on this, PETA,” she wrote. “A shame, because I’ll bet we agree on what I hope is the true meaning of your mission — respecting God’s creation and critters.”

Except “respecting God’s creation and critters” is not really what PETA is about. If it were, they wouldn’t be killing the animals they are in fact killing.

I love Sarah Palin! PETA seriously needs to relax. Im sure that the dog was not hurt by this. Considering all the other atrocities against animals in this country, I think PETA needs to pick their battles more wisely. Goooo Sarah!!