So the big bad boys who think they have America quaking in our boots are afraid of women; priceless. Many women are armed in Kobani, either to fight the monsters of ISIS, or to shoot themselves if they are at risk of being captured.[1] 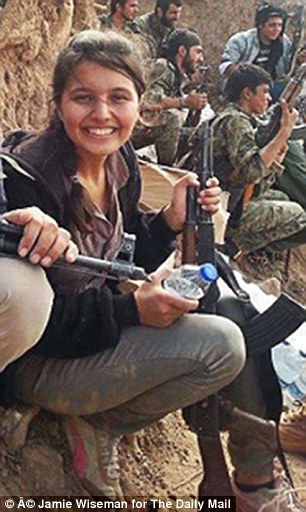 You wouldn’t know it from her sweet smile, but the reason why Nesrin Abdi carries a rifle is in case she needs to shoot herself dead.

This, she explained matter-of-factly, would be preferable to being captured by the monsters of Islamic State.

Nesrin, a 20-year-old medical student, is by all accounts a happy, well-educated, middle-class young woman with an infectious joy for life.

In her home town of Kobane on the Syria-Turkey border, moments of joy are rare, but a photograph captures the triumphant moment three days ago when she was among Kurdish fighters who recaptured a strategic hill from the Islamic State invaders.

The jihadis’ sinister black flag was torn down and replaced with a fluttering Kurdish red-and-yellow banner, marking what may well prove a symbolic turning point in the life-and-death struggle for the besieged town.

But Nesrin, a doctor’s daughter who has joined an army of women battling to defend Kobane, is aware that every day could be her last.

She told me: ‘Everyone knows what happens if IS catches you. For a woman it is rape, followed by beheading. We have all seen the videos of the American and British hostages beheaded in the desert. They will treat us the same.

Every middle-eastern woman who detests ISIS needs to be armed. Nobody deserves the vile treatment that befalls victims of the Islamic State, and if armed women are their Kryponite, then we need to exploit that.