Many of us enjoy playing in the snow, but few would dare to jump off a five-story building into it. One man did and his footage is going viral.[1] 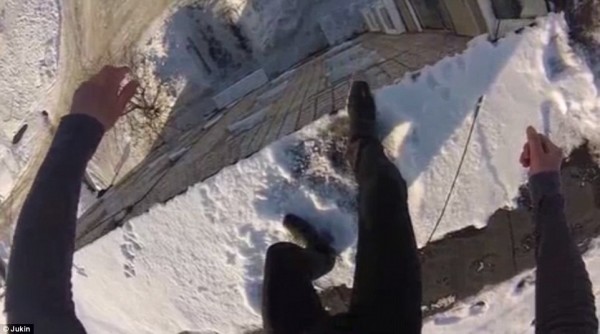 This is the astonishing moment one thrillseeker jumps off a 50ft building onto the ground below without safety equipment.

Russian daredevil Alexander Chernikov teases the viewer by edging his foot over the side, all caught with a GoPro that is attached above his head.

He then plunges off the building, believed to be in Novoaltaysk, Russia, landing in a mound of snow below.

To get a true scale of the jump, as well as filming from his own strapped-on camera, someone is recording the leap of faith from the ground.

It’s clear to see that Chernikov does not have any strapping or harness attached, demonstrating just how dangerous the jump is.

The action then flicks back to the view from the jumper’s camera – and if you feel queasy with heights you might want to look away.

Chernikov rockets into the mound of snow, his Go Pro capturing the moment of impact perfectly.

Thankfully, the 23-year-old gets to his feet after the stunt, gives a smile for the camera, before dusting some of the snow off him.

This is not the first time the Russian has provided some shock factor.

Back in February this year, he decided to set himself on fire and leap off a 100ft building.

That stunt didn’t quite go to plan like this latest one however. Chernikov was hospitalised with burns and was later arrested by Russian police for the act.

Mr. Chernikov certainly has more guts than me; however, I suspect that given his propensity for such outlandish acts, I will likely live longer.