When you wait as long as possible to officially announce you’re running for President, you want everything to go smoothly.  That…didn’t quite work out for Scott Walker[1], whose Twitter account announced that he was running three days before he was supposed to… 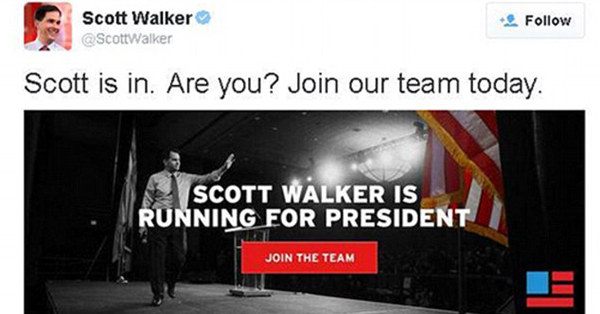 Scott Walker has announced his presidential run by accident.

The Wisconsin governor threw his hat in the ring on Friday afternoon via an apparent misfire from his Twitter account.

The message, which asking for campaign volunteers, carried the words ‘Scott Walker is running for president’ in block capitals.

Walker aides claim it was a “glitch” with the website, and not their fault. Walker will make things interesting because while prominent Hillary Clinton donor Donald Trump is taking up most of the oxygen, Walker is considered by many to be the conservative alternative to Jeb Bush.