Seattle Dog regularly rides bus in RUSH HOUR: by herself!

I LOVE this story about an amazingly smart and sweet pup with a mission to her destination! Yep, commuters in Seattle report seeing a Black Labrador riding the bus [1]alone in recent weeks. 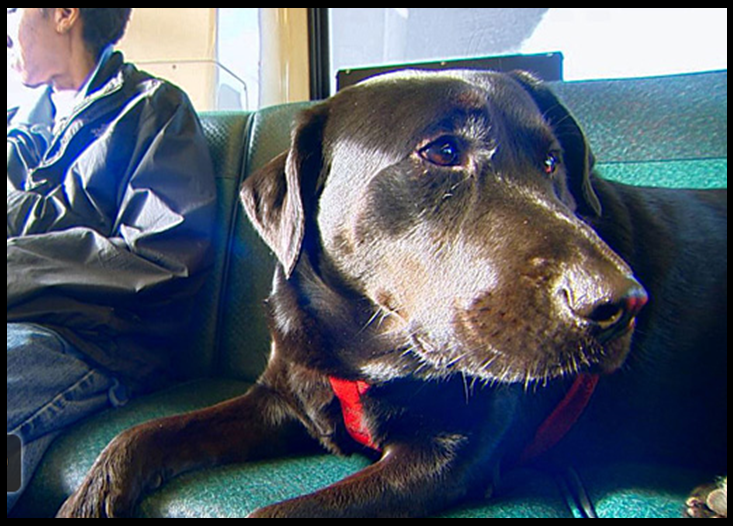 The 2-year old has been spotted roaming the aisles, hopping onto seats next to strangers, and even doing her part to clean the bus — by licking her surroundings.

“All the bus drivers know her. She sits here just like a person does,” said commuter Tiona Rainwater, as she rode the bus through downtown Monday. “She makes everybody happy. How could you not love this thing?”

When the dog got off the bus – without an owner – at a dog park last week, it piqued the curiosity of local radio host Miles Montgomery of KISW-FM.

“It doesn’t really appear to have an owner. The dog gets off at the dog park. I just look out the window and I’m like, ‘did that just happen?'” Montgomery asked. “She was most concerned about seeing out the window, and I couldn’t figure out what that was. It was really just about seeing where her stop was.”

Turns out the dog, Eclipse, doesn’t always ride the bus alone. She visits the dog park a few times a week, sometimes with her owner. The duo lives right near the bus stop at 3 Ave. W. and W. Mercer Street. Eclipse’s solo rush hour ride happened one day when her owner took too long to finish a cigarette.

Young said the tradition has been going on for a while.

“She’s been here the last two years, so she’s been urbanized, totally. She’s a bus-riding, sidewalk-walking dog,” he said. “Probably once a week I get a phone call. ‘Hi. I have your dog Eclipse here on 3rd and Bell,'” he recounted. “I have to tell them, ‘no. She’s fine.’ She knows what she’s doing.”

A spokesman for Metro Transit said the agency loves that a dog appreciates public transit.

I guess no one minds if Seattle is going to the dogs… if the dogs are all as smart as this pup.