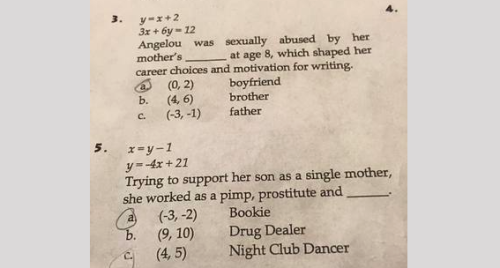 Is this class math or sex education? In this day and age, a time when sexual abuse and sex crimes are rampant, one school [2]district thought it was a good idea to include those depraved activities on a math test. That’s right, a MATH test. Because why wouldn’t we want kids thinking about inappropriate sexual activity while trying to take a math test? Who is running these schools; the kids, the grownups, or the clueless?

One story problem on an algebra test in Florida has parents questioning the school district’s judgement.

The Lee County School District in southwest Florida has raised the ire of some parents over their choice of test for an algebra class. The subject used in the set-up for the questions on the test was the late Maya Angelou’s life. What parents are objecting to is some of the parts of Angelou’s life they decided to highlight, they believe, are inappropriate not only for a math test, but for 8th graders.

One of the questions causing a stir is:

Angelou was sexually abused by her mother’s _____ at age 8, which shaped her career choices and motivation for writing.

Historically accurate, parents object to the concept of sexual abuse being used as part of a child’s math class.

Trying to support her son as a single mother, she worked as pimp, prostitute and ______.

Upon seeing her daughter’s test, one mother told Fox 4, “I read it and just thought, ‘what in the world?’ this is so inappropriate for a 13 year-old 8th grader.”

“The worksheet in question was utilized by Algebra I Honors classes and was chosen by a veteran teacher for its alignment with Florida Standards. While Maya Angelou is a well-known American Author and the facts of the worksheet are historically accurate, the Principal believes they were inappropriate for some students. She has delivered a ParentLink message to 91 homes “sincerely apologizing” for the use of the material and met with the teachers that utilized the worksheet.”

How does a teacher even think this is okay? Even if these tragic things are facts of life for some students or famous adults, why would anyone want to emphasize it, or try to make it seem like a reasonable part of life? It isn’t. We should be calling students to think about things of high ethical and moral value, not entice them to put their minds in the gutter. This is, plain and simple, a form of child abuse. Students deserve better than teachers who want them to think about pole dancing and pimps.