A convicted felon known more for his criminally good looks than for his crimes is looking forward to becoming a model and actor now that he is free from behind bars. Isn’t the world a strange place?[1] 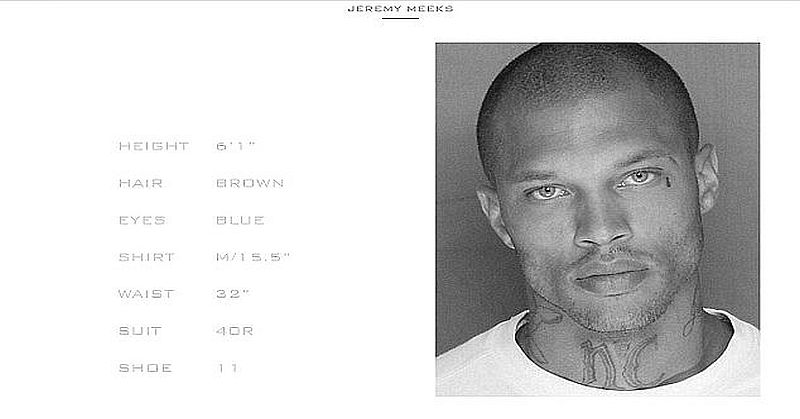 Jeremy Meeks of California became known as the ‘Hot Felon’ after his baby-blue eyes, razor-sharp cheekbones and chiseled jawline first caught the public’s attention when his mug shot was posted on the Stockton Police Department’s Facebook page in 2014.

Despite being behind bars for possession of a firearm, the 30-year-old was signed by talent agency, White Cross Management last year under Jim Jordan. He was released from prison earlier this month.

‘I want to thank my family and everybody for all your love, support and prayers. I’m overwhelmed and grateful for what lies ahead. I’m ready,’ Meeks wrote on an Instagram photo posted this week.
‘We’re putting everything in place,’ Jordan told BuzzFeed this week following Meek’s release.
‘We’re in talks with a lot of different agencies. There’s movies on the table. We have a lot of different things happening.’

‘I’m in a place where I will be able to provide for my family and really change my life,’ Meeks told ABC News from a Nevada prison last February.

‘I never thought that everyone in the world would recognize me for my looks, so I feel extremely blessed and very thankful.’

Meeks told ABC last year that he worked out regularly to be camera ready after his release.

‘I eat healthy. I do a lot of push-ups, pull-ups, dips, burpees, and I stay very active,’ he added.

Meeks has his eye on acting as well and told ABC that he would love to be on a show like Sons of Anarchy.

‘There is a sea of opportunities waiting for him,’ Jordon told ABC.

Meek said what he misses most is his family.

He said his family has been very supportive of him.

Best of luck to you, Jeremy. I hope this provides a fresh start and a new chapter for your life.