Just like many of the presidential election victors before him, Donald Trump on Thursday took a trip to the White House to meet with his predecessor, Barack Obama[1]…but he did so, without the company of a journalist pool. The Associated Press said that Trump departed New York Thursday morning, breaking etiquette by not bringing journalists in his motorcade or on his plane to, well, ‘document’ his first trip to the White House as President-elect. Uh huh…

Trump headed to DC without a traditional protective pool, which shouldn't be surprising as I wrote Monday: https://t.co/YTSphqm3cX[2] pic.twitter.com/bZbR0a3Nj2[3]

White House Correspondents Association President Jeff Mason contacted the media journalists in the Trump pool Wednesday night to let them know that their presence was granted, too — even if the president-elect declined to bring them along.

“The White House has been in touch with the Trump team about this but apparently has not gotten a lot of communication back, if Trump advisers are telling their poolers[5] there will be no coverage, that is not correct. The transition pool is invited to cover the meeting at 11:30 in the Oval Office with the White House pool.”

That’s pleasant for now, but beginning Jan. 20th, when Trump is sworn in, the hotelier mogul will maintain full control over media access…so who wants to bet they will be left out in the cold? 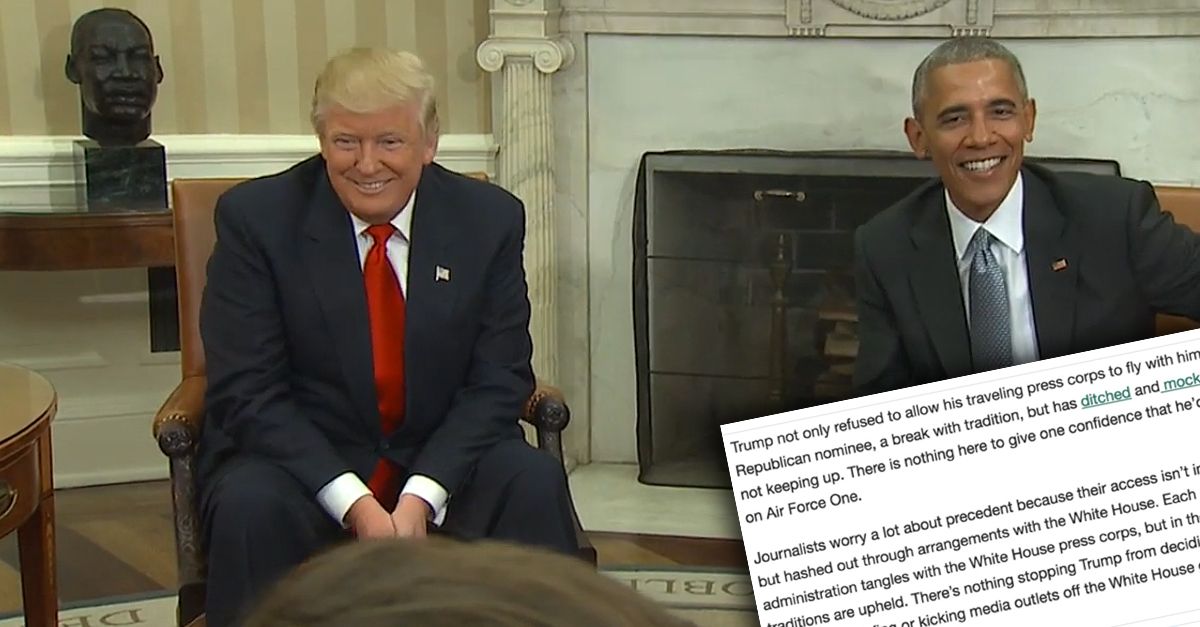 What were you expecting from Trump, lefty media? Did you think he was going to forget the general election coverage you all hacked up? Because of you all, Trump can break with tradition and flip you all the middle finger…and you know what? The people aren’t going to care one damn bit. For decades, you have denigrated the right and pushed every left wing agenda you could. Instead of being the first line of defense against lies using unbiased facts, you have done nothing short of being lefty agenda pushers for the Democratic Party.

Now that Trump is going into power, we can’t even trust you to keep him straight because everything you say is so slanted and biased, you can no longer be trusted.