She was ordered to take down her flag. Then she reads this in the rules.

Always read the small print. Most of the time that print is used against you, often times having you commit to things you aren’t aware that you are committing to!  In Tennessee, a woman is glad she did read the rules [1]when she was required to take down a flagpole. 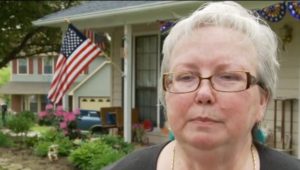 “It always pays to double-check the rules.

Tennessee veteran Delia Foster was forced to take down her flagpole by her homeowners association a few months ago, but now she’s flying Old Glory once again thanks her own hard work, WBIR-TV reported[3].

When she was initially told to remove the flag — the HOA deemed it a “structure” that didn’t have approval — Foster said she was crushed.

“It felt like there was an empty place,” said Foster. “Not only in my yard, but in my heart.”

But she swore not to give up.

“I am also a person who fights for what I think is right, I will do research, get to the bottom of things,” said Foster

Foster discovered the HOA followed county codes — and when she went to the mayor, she learned that the county doesn’t define flagpoles as structures.

Then she went back and checked the HOA rules and, sure enough, it had never specifically banned flagpoles.

So Foster’s pole is standing once again.

Foster has also installed a light to shine on her newly restored flag 24/7.

“It really makes me feel great to be able to walk under that flying flag again,” she said.”

If only she could have required the HOA to pay to reinstate her flagpole for her that would have been the justice she deserved.  Meanwhile, the HOA will probably be watching her like a hawk waiting for her to break some other rule.