One of the biggest names at the fore-front of the anti-police campaign is Rev. Al Sharpton. After making several speeches disparaging cops, “America’s Sheriff” Joe Arpaio has finally had enough of Sharpton’s self-important babble. He has proposed a challenge that would require Al to take the “shoot-or-be-shot” test. [1] 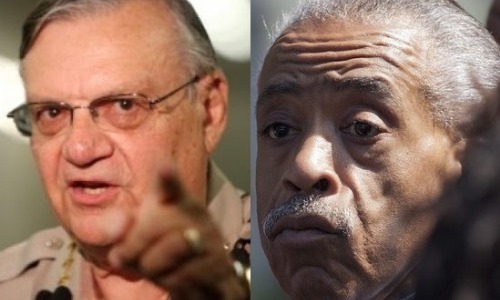 Amid ongoing efforts by the protesters to denounce police for being abusive and quick-triggered, one such activist agreed to take part in a force-on-force training with the Maricopa County Sheriff’s Office.

And he failed spectacularly.

“Let’s come on down here,” he said of Sharpton, according to Fox 10 News[4]. “I think you are the prime guy to do this and learn a lesson.”

Jarrett Maupin, a vocal critic of Phoenix, Ariz., police, agreed last week to go through three real-world scenarios where trainees have to decide to shoot, or not to shoot.

In the first scenario, Maupin was shot by a suspect, in the second, he shot an unarmed suspect charging him, and no shots were fired in the third scenario

I have zero faith that Sharpton will take Joe up on his offer, but his reaction will certainly speak volumes to his character.
Endnotes: