She’s Even Dumber Than You Thought: Hillary Says Global Warming Is Behind The Syrian Refugee Crisis

Instead of blaming Islamic terrorism and the Syrian refugee crisis on jihadists, Hillary Clinton is now blaming climate change for the entire fiasco.

Here’s what Hillary said last night at the Democratic debate[1]: 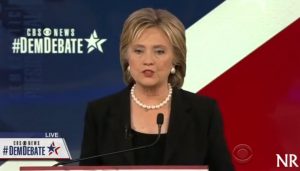 Climate change is a contributing factor in the world’s most dire refugee crises, including the one in Syria, Hillary Clinton said in Iowa Tuesday.

Clinton was asked at a town hall in Coralville about what the United States can do about refugee crises in Syria and Africa. After a long answer on Syria, including calling for a international conference organized by the United Nations to address the issue, the former secretary of state and 2016 candidate turned to the causes of refugee crises.

“We have to ask ourselves: Why is this happening?” Clinton said. “Because of terrible governance, because of corruption, because of conflict, because of climate change, there are so many reasons why people are being, in their minds, forced to leave and try to get to safety.”

Really? We’re going to blame a mass migration on global warming? What is Hilary smoking these days?