SHOCK: WikiLeaks Email Dump Shows Who Was Really Behind The Anti-Trump Protests

Chaos and disruption[1] are nothing new to Leftist protesters. Violence, destruction of property, thuggery, assault…all a part of the Democrat protest handbook. We’ve all known this forever, but now it’s been confirmed by the WikiLeaks DNC email leak. The protests at Trump rallies were all part of the DNC game plan. Read on for details. 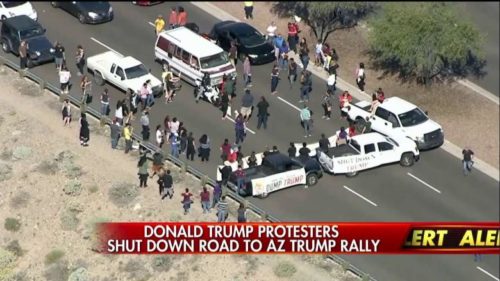 In multiple emails, DNC officials signed off and acknowledged the existence of two anti-Donald Trump protests in South Bend, IN and Billings, MT. The release of nearly 20,000 emails is the first in a WikiLeaks “Hillary Leaks” series.

On April 29, a DNC press staffer, Rachel Palermo, alerted Eric Walker, deputy communications director, about a Facebook page for an anti-Trump protest on May 2 in South Bend. “Whoo! Thanks to our interns for finding this out.” Walker replies, “I like it, as long as the students feel safe getting involved. I imagine this demo will be nicer than the one in San Fran today.”

That day in San Francisco protesters blocked off roads to an event Donald Trump was hosting. The Republican nominee ended up having jump down from the highway and sneak around back to enter.

In another other email chain also on April 29, titled “Week-Ahead Notes & Assignments,” former DNC media booker Pablo Manriquez comments “this should be fun” in reference to the May protest.

University of Notre Dame, located in South Bend, is Manriquez’s alma mater. A DNC official wrote, “Pablo please reach out to any folks you think may be able to help.”

Another protest that’s directly mentioned in emails included one that occurred on May 26 in Billings, MT. The email is from May 20 and features notes on the “week ahead.”

America knows it isn’t Republicans out burning flags, attacking police and punching Trump supporters. It’s Democrat thugs. And it is par for the course for them. No tactic is too low, too sleazy or too outrageous to use on their opponents. It’s time to vote these thugs out of power and rescue America from the clutches of the Democrat machine. Any political party that would condone or promote what the Democrat protesters did at Trump rallies is a disgrace and should not be able to hold office.