Two South Carolina women are pledging self-defense after they were caught on camera pulling each other’s hair and fighting on the ground of a parking lot during an alleged road rage incident. This is crazy[1]: 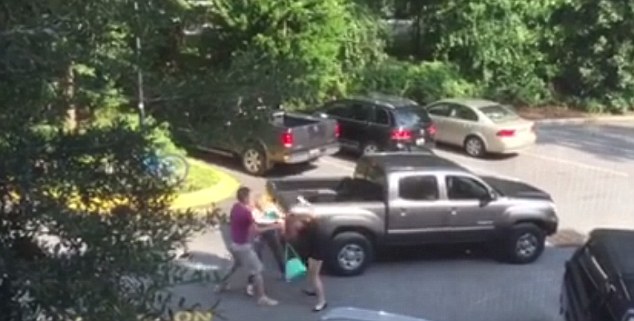 James Taylor Goble and his wife Stacy were leaving a seafood restaurant with their son at the Bluffton Promenade on September 5 when they allege they were nearly hit by a car driving recklessly.

The Gobles followed the car through the parking lot and confronted Kerstin Taylor when they claim she began cursing at them after Stacy asked her who had been driving the car and if she was okay.

But Taylor argued she wasn’t speeding and that she only tried to apologize and walk away after the Gobles accused her of almost hitting their children, according to The Island Packet.

Taylor said the things got out of hand after she pointed out to the couple they had driven in the wrong direction on a one-way street in the lot.

She claims Stacy Goble then tried to smack the coffee she had in her hand onto her face, while Stacy said she was deflecting the cup she claims Taylor tried to throw at her.

C’mon ladies, we need to act like moms. This is way out of control. Check it out: