Some new disgusting surveillance video shows a pack of two teens and two older men following a helpless 50 year-old churchgoer before they attacked her[1] and forced her to perform oral sex at gunpoint.

The footage also shows the nameless mother-of-two walking along 150th Street in Queens, New York with two bags in her hands, right before the heinous alleged sexual assault happened. 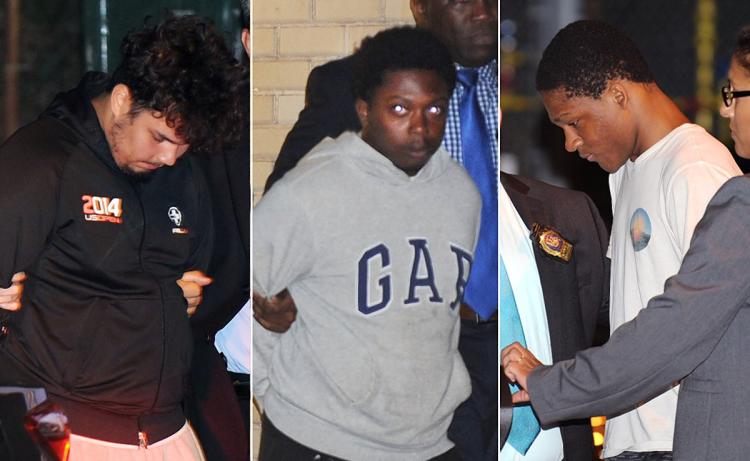 The four men, who are also being accused of robbing her, appear in the video moving along the other side of the street on the side walk. The suspects walk in line together before one breaks off from the group after scoping out the helpless victim leaving a church prayer service.

Julisses Ginel, 19, Justin Williams, 17, and Brandon Walker, 20, are the animals that are said to have participated in the attack on Thursday. The fourth in the group is currently on the run.

The victim was forced at gun point to strip naked and do sexual acts on the monsters. Prosecutors on Friday represented the ‘pack-like mentality’ the group of men used to prey on the woman like she was some type of animal, with one of them serving as the ‘lookout’ so the others could rape their victim.

District Attorney Richard Brown is the prosecutor of the case:

‘The crimes that the defendants are accused of committing that night are despicable and are deserving of significant punishment. Two of them are alleged to have subjected her to heinous acts of sexual abuse. It is alleged that with a pack-like mentality the defendants and an unapprehended fourth man set upon a defenseless woman coming from church.’

Police said the victim exited the Celestial Church of Christ in Jamaica, Queens, shortly after the service took place and before 11 pm on Tuesday. She was attacked shortly after. The men allegedly robbed the woman after assaulting her and they used fake guns the whole time to force her to cooperate.