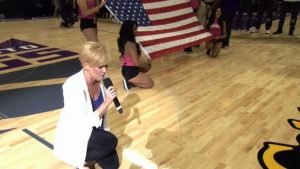 God bless America. We have the right to express our political and social viewpoints. But I have to say, I am not entirely thrilled with this form of protest. It started with Colin Kaepernick. During the National Anthem rather than stand, he took a knee. Apparently the flag and everything it stands for is just too offensive.

It is a tricky situation. He disrespects so much more than a flag or a piece of cloth. He disrespects everyone who has died under that flag and everyone who has fought for that flag. But it is his right and it is spreading like wildfire. Most recently at the Sacramento Kings opening basketball game. But this time it wasn’t the athletes who made a stand…. by taking a knee.

Leah Tysse, a breast cancer survivor, was asked to sing the National Anthem for the opening game of the King’s season. She fell to one knee in the conclusion of the song. Hitting her knee during the final line. “O’er the land of the free and the home of the brave.” As she sang out the words, “land of the free” she lowered herself to the ground.

It was a bold statement for a singer most of us have never heard before. She has refused comment today. What do you think of this bold new protest? it is peaceful. But I can’t imagine it being more disrespectful. They kneel for the reason so many stand. Because this country has, from its conception, fought for freedom. Never has this country been perfect, but with each generation we become better. There were wars fought under that flag for the freedom of the slaves. Eventually there would be marches up to the Capitol under that flag calling for the end of segregation.

That is why many stand. But for this woman, it took her to her knee.

Was she right to do what she did?