Andy Parker, the father of Alison Parker who was brutally murdered on live television when a racist black man killed her and her cameraman in cold blood, has continued to vow that he will fight for gun control.[1]

But, his views do not exactly match up with his own priorities it seems. 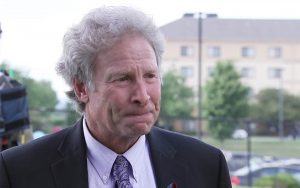 On August 28, Andy Parker, father of slain WDBJ-TV reporter Alison Parker, said he does not own a gun, but he thinks he needs to buy one “now that he has decided to be an outspoken advocate for tougher gun laws.”

According to the AP, Andy said he “will have to buy [a gun] now that he is going to be a public advocate for stronger gun laws.” And one of the laws he plans to push will require people at gun shows to undergo background checks for gun purchases.

On August 26, Andy told Fox News’s Megyn Kelly that gun control “is something that is Alison’s legacy,” and he spoke with Virginia Governor Terry McAuliffe to say he would “shame people” and “shame legislators” into passing more gun control laws.

Parker is running into the same issue many who call for stricter gun laws run into.

Often times, Hollywood gun control advocates have armed bodyguards, home security and gated mansions. Parker is no different, as you cannot push for gun control while also advocating his personal need for owning a gun.