While many people are rightfully concerned about the spread of the Federal Common Core curriculum in American schools, sadly it seems few people are paying attention to those currently teaching our children in the realms of higher education. 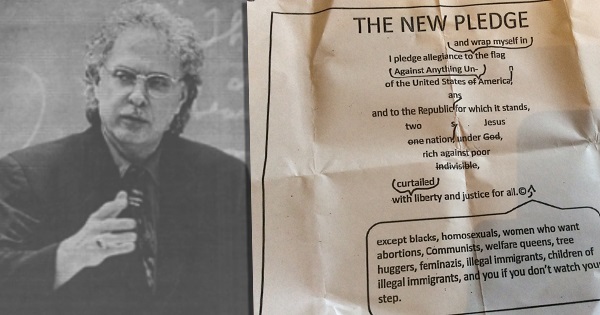 Case in point.
Campus Reform reports that a college professor in Denver is forcing his students to recite an Anti-American, Anti-Republican ‘pledge of allegiance’ (pictured above):
“Dr. Charles Angeletti, a self-proclaimed atheist and socialist professor of American Civilization at the publicly funded Denver university, required students recite the satirical Pledge of Allegiance during the fall 2014 semester according to a class flier obtained by Campus Reform.
“I pledge allegiance to and wrap myself in the flag of the United States
Against Anything Un-American and to the Republicans for which it stands,
two nations, under Jesus, rich against poor, with curtailed liberty and
justice for all except blacks, homosexuals, women who want abortions,
Communists, welfare queens, treehuggers, feminazis, illegal immigrants,
children of illegal immigrants, and you if you don’t watch your step.”
The flier was distributed to the entire class and students were required to recite it according to Steven Farr, an MSU freshman majoring in Meteorology.”

Considering that Colorado is becoming a Progressive stronghold, the fact that a Socialist Professor is forcing his students to recite this Anti- American pledge is no surprise. What will be surprising is if the parents, who are paying tens of thousands of dollars in tuition, actually care that it’s being used to fund this Socialist, Progressive diatribe.