Are you a death-defier or a “play it safe” kind of person? There’s no right or wrong answer; some people are just more adventurous than others. Some are like Allan Dixon who tempt death for the enjoyment of himself and others and thankfully, he is willing to bring people along on his adventures as he documents his stunts. His recent feat, climbing an incredibly-high tree without safety equipment, is a doozy. Check it out:[1] 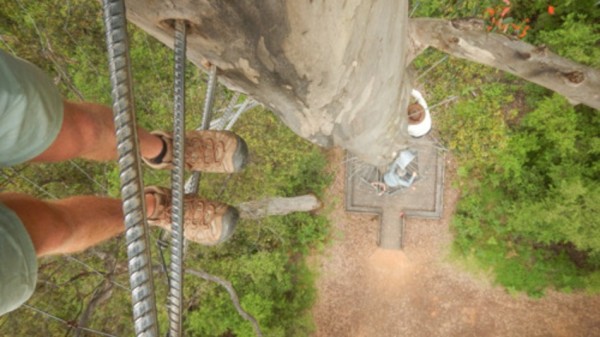 Sometimes you have to be thankful there are people who live life as if they have a legitimate death wish.

Allan Dixon, a self-styled adventurer and objectively great taker of animal selfies[3] from Ireland, has climbed a 75 metre-high tree in Pemberton, West Australia.

Doing so without a rope or harness, the only way to climb the Dave Evans Bicentennial Tree is by climbing metal pegs jutting out from the tree’s trunk. Dixon recorded the feat in 360-degree video, so we can kind of feel like we’re there with him without the potential danger of breaking every bone in our body.

You’ll need to view it through[4] a supported browser or YouTube’s app for smartphones to get the full experience, but we’re sure you’re already across that.

Dixon spoke to Mashable Australia to confirm he really didn’t have any safety equipment on him at all.

“All the websites for information on the tree say you can climb it, but none of them really say how to,” he said. “The gaps betweens the pegs, there’s nothing to stop you from falling through them. You’re either going to die or you’re going to have a great time.”

Using a monopod and a mount that sticks six GoPro cameras facing in different directions together, Dixon stuck the device on his head — like a human Google Maps car — and climbed to the summit to give us all a breathtaking view.

“It’s basically a big, 360-degree selfie stick,” he said. “The worst thing about it is you have to make sure everything is charged up, all the cards are in… We ended up with about 300 gigabytes worth of footage.”

Dixon used to work for Tourism Australia, but is now trying his hand at recording crazy stuff for his YouTube channel, 360 Thrill[5]. He’s off to a pretty good start, by the looks of things.

“360-degree videos are still such a niche market, and in the last five months I’ve tried picking it up,” he said. “I’ve been filming for the last 10 years, but now I basically just want to create the most amazing 360 content out there.”

In terms of height, this is a first for Dixon. He’s doing increasingly wild things for his channel, but climbing this tree gave him some big nerves. “My mother nearly had a heart attack when she saw the video,” he said. Same, mum, same.

Life is meant to be lived, to be enjoyed. While some might find death-defying stunts to be the firmest affirmation of this mantra, others are more contented by a good book and a warm fire.

Thankfully, for those of us who do not wish to tempt death, there are people like Allan Dixon who are willing to document these insanities for us to witness from the safety of our home.