All presidencies are plagued with scandal. But let’s be honest: a reading of a fraction of the scandals that surround the Obama Administration is enough to make one run to take a hot shower. Now, Fox News[1] reports on another one within the bowels of the State Department bureaucracy. 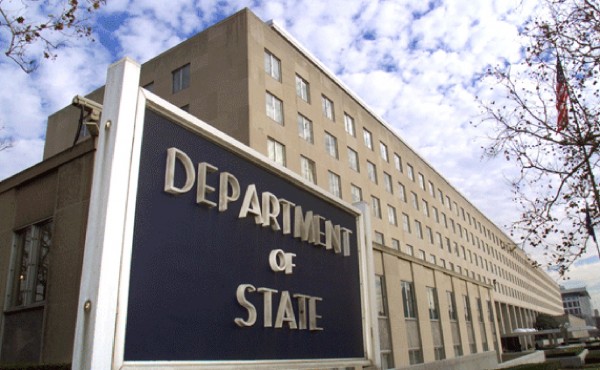 A State Department employee is accused of hacking into the e-mail accounts of young women, accessing compromising images of them, and blackmailing them.

Michael Ford, a staffer at the U.S. Embassy in London, was arrested last week at Atlanta’s airport. He was preparing to board a flight back to London after visiting his parents in Alpharetta, Ga., according to the Atlanta Journal-Constitution.

Ford is facing charges that include cyberstalking and making interstate threats. State Department spokeswoman Marie Harf said Thursday that Ford was a “locally hired, administrative support employee,” not a foreign service officer and hasn’t been employed at the embassy since Monday. It remains unclear what Ford’s exact role was at the embassy, where he had worked since 2009.

The federal complaint unsealed this week alleges that Ford, a U.S. citizen who has lived in Great Britain since 2005, accessed computer accounts of young women to obtain sexually explicit images of them.

In one case, prosecutors, say, Ford posed as a Google employee to obtain the password to an Illinois woman’s Google email account. Prosecutors say Ford then threatened to post the images online unless the women complied with his demands, such as requests that they shoot videos of other women undressing.

The FBI this year investigated emails sent to women across the U.S., including an 18-year-old Kentucky woman, court records show.

“I want you to record videos of sexy girls changing. In gyms, clothing stores, pools … You do that, and I disappear,” he wrote to an 18-year-old Kentucky woman, who pleaded with him to leave her alone, the affidavit states. Investigators said he sent a follow-up e-mail, saying “OK, time’s up. Everything I have will be posted online and sent to your friends. Pictures, name, phone number, home address … I gave you a chance and you blew it!”

A special agent in the FBI’s Chicago field office investigated more emails sent to a 22-year-old Illinois woman, threatening to post sexually explicit photos of her.

Investigators say Ford obtained her address, where she worked and went to school, and the names of her parents, who received emails from him requesting information about their daughter.

The court records do not identify the women.

A State Department investigator said a search of Ford’s computer at the London Embassy turned up a spreadsheet of about 250 e-mail addresses, some of which are associated with schools such as the University of Michigan.

“I believe that the account holders listed on the spreadsheet are all victims of Ford’s criminal activity,” the agent wrote in the affidavit.

State Department agents also determined that several of the account holders appear to belong to the same sorority at a college in Indiana, the affidavit states.

Ford remained in custody Thursday. He’s scheduled to have a preliminary hearing in U.S. District Court in Atlanta on June 1.

Bunch of class acts over there at the State Department…